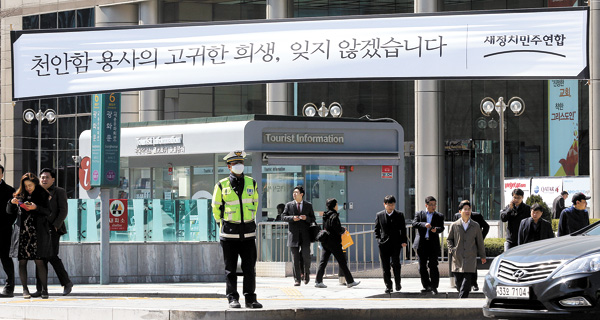 The opposition New Politics Alliance for Democracy hung a banner Tuesday at the intersection of Gwanghwamun, central Seoul, that read, “We will not forget the honorable sacrifices made by the heroes of the Cheonan.” By Kang Jung-hyun

North Korea called on South Korea to lift the so-called May 24 sanctions imposed in retaliation for the deadly attack on the warship Cheonan nearly five years ago and continued to deny its responsibility for the sinking that killed 46 navy men.

The North’s outright rejection of blame Tuesday and its angry rhetoric about Seoul’s sanctions clouded prospects of a breakthrough in inter-Korean relations anytime soon.

The Lee Myung-bak administration announced the sanctions on May 24, 2010, and demanded Pyongyang’s apology for the attack as a condition for their lifting and resumption of bilateral economic projects such as South Korean tours to Mount Kumgang, which have been suspended for seven years.

In a statement issued by the North’s powerful National Defense Commission two days ahead of the fifth anniversary of the sinking of the Cheonan, the North reiterated it had nothing to do with the sinking. North Korean leader Kim Jong-un is first chairman of the commission.

“Even though five years have passed since the sinking, the Southern government still insists on linking us with the incident though we had no business in it.

“No matter how damaging the incident was, it is beyond logic to ratchet up inter-Korean conflicts by accusing us of responsibility for a sinking for which we were not responsible,” read the statement.

A military-civilian international joint investigation team comprised of South Korean, U.S., Swedish, British and Australian experts attributed the sinking to a submarine attack by North Korea in the Yellow Sea on March 26, 2010.

The sanctions by the Lee administration halted almost all inter-Korean cooperation except for work at the industrial complex in the border city of Kaesong.

With the Park Geun-hye administration in its third year, suggestions that the sanctions be lifted have been floated in political circles even without an apology from Pyongyang.

This year is considered by analysts the best time for Park to push for a thaw in frozen inter-Korean relations. There are no major domestic elections in South Korea this year.

On Seoul’s proposal to bring the issue of lifting the sanctions to a negotiating table, the North said the idea amounted to a “declaration of conflict” and an “insult” to the regime.

In response, a senior official from the Unification Ministry rebuked the North’s claim, saying the joint investigation proved that North Korea torpedoed the Cheonan corvette.

“The May 24 sanctions were put in place to hold North Korea accountable for its attack on Cheonan,” said the official speaking on the condition of anonymity.

“If it wants to see the sanctions lifted, it must take responsible action that South Koreans can accept.”

Meanwhile, the opposition New Politics Alliance for Democracy hung banners on streets nationwide that read, “We will not forget the honorable sacrifices made by the heroes of the Cheonan.” The fact that the opposition party used such banners to commemorate the sinking suggests a possible shift of focus to national security matters.

‘Guanxi’ and the black society (KOR)