Park to go for funeral diplomacy

Park to go for funeral diplomacy 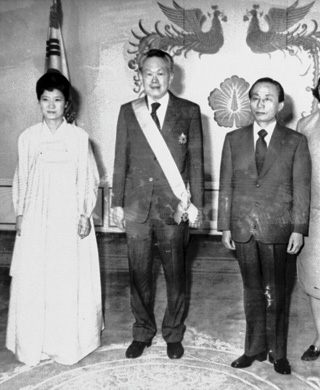 Lee Kuan Yew, center, founding prime minister of Singapore, posed for a photograph on Oct. 19, 1979, with Korean President Park Chung Hee, right, and his daughter Geun-hye, left. Park was assassinated by his aide seven days after the meeting with Lee. Provided by the National Audio Visual Information Service

President Park Geun-hye will be one of the world leaders going to Singapore to pay their respects to Lee Kuan Yew, the late founding prime minister, and foreign affairs experts welcomed her decision to do some funeral diplomacy.

After the passing of Lee was announced Monday, Park issued a statement to express her condolences and the Blue House moved quickly to announce the president’s decision to attend his funeral. The event is scheduled to take place at 2 p.m. on Sunday at the National University of Singapore.

It will be the first time in 15 years that a Korean president is attending a foreign leader’s funeral. In June 2000, then-President Kim Dae-jung visited Japan to attend the funeral of Prime Minister Keizo Obuchi, who died in office of a stroke.

Park’s decision to attend Lee’s funeral was considered significant because she skipped funerals of international figures attended by world leaders.

Park’s decision to attend Lee’s funeral appeared to be based on her deep personal respect for him. “He has given me affection you can get from parents,” Park wrote in her memoir in 2007.

“The biggest reason for Park’s decision to attend the funeral is her special relationship with the late leader,” a presidential aide told the JoongAng Ilbo. “Their relations go back to her father’s days.”

When Park’s father, the late Park Chung Hee, was president, he had a summit with Lee in 1979 at the Blue House. Park played the role of first lady after her mother was assassinated, and during the dinner with Lee, acted as interpreter for the two leaders.

One week after the dinner at the Blue House, on Oct. 26, 1979, Park Chung Hee was assassinated.

Park met Lee again in 2006 when he visited Korea. At the time, Park was the chairwoman of the Grand National Party, the predecessor of the ruling Saenuri Party. In July 2008, she visited Singapore at the invitation of the late prime minister.

According to a senior government official, the minister of foreign affairs of Singapore, K. Shanmugam, telephoned his Korean counterpart, Yun Byung-se, Monday afternoon and made a request for Park’s attendance, taking into account the special nature of the two countries’ relations and the late leader’s personal ties with Park.

Foreign affairs experts welcomed Park’s decision to attend the funeral and recommended the president to use the trip to engage other leaders.

“The 2013 funeral for Mandela, the late South African leader, was a grand opportunity for diplomacy by world leaders,” said Yoon Young-kwan, former foreign minister. “Lee’s funeral will be the largest diplomatic arena for East Asia.”

“When a delegation is sent to a funeral, middle powers are more careful than superpowers,” Kim said. “They know that the choice of the chief delegate sends a strong message. And that’s why some superpowers sometimes make mistakes. The Park government prompted middle-power diplomacy, and it is very well aware of the importance of funeral diplomacy.”

Kim also said that funeral diplomacy allows the participants to engage in conversations more calmly. “It won’t lead to a dramatic outcome, but it will provide a natural opportunity to have a dialogue,” he said. “If Japanese Prime Minister Shinzo Abe attends the funeral, we can expect an encounter with Park.”

Park Joon-woo, head of the Sejong Institute and former Korean ambassador to Singapore, said Chinese President Xi Jinping is likely to attend the funeral because Deng Xiapoing’s policy of reform started immediately after a meeting with Lee in 1978. “The funeral can be used as a natural opportunity to deliver Korea’s intention to join China’s Asia Infrastructure Investment Bank,” he said.