Drought has ill effects for farmers

Drought has ill effects for farmers 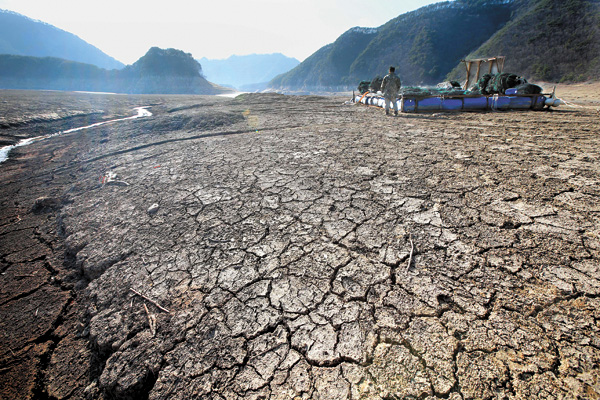 The bed of the Soyang Reservoir is cracked, the result of a long-lasting drought in Gangwon. The water level at the Soyang Dam stood at 157.4 meters on Sunday, the fourth lowest since it was constructed. By Oh Jong-taek

A farmer in Chuncheon, Gangwon, Mr. Choi recently had to alter his work routine on his land near Soyang Dam, an embankment dam across Soyang River.

Before, he would move his supplies from a barge parked near the road to his tractor, which was possible when water levels were higher.

But now things have changed.

“I have to walk 200 meters (656 feet) to carry those things from the barge to my trailer,” the 58-year-old said, “because the water in the river has dried out.”

Those complications are just some of the effects local farmers and fisherman have had to endure since a long-lasting drought that started last winter has left western Gangwon, northen Gyeonggi and Incheon with water shortages.

The water level at the Soyang Dam stood at 157.4 meters on Sunday, the fourth lowest since it was constructed. Two-thirds of its storage capacity has already been released, while the water level has decreased 3 centimeters (1.18 inches) per day.

Data from the Ministry of Environment shows that 21 villages in Gangwon, Gyeonggi and Incheon are short of drinking water.

In Inje County, Hongcheon County and Chuncheon, a regional fire station has provided some residents with water, while a local civic organization donated nearly 30,000 two-liter water bottles to locals in Pyeongchang County, Gangwon, and the island areas in South Jeolla.

The amount of water for farming is also on the decline. In Ganghwa County in Incheon, the reservoir’s storage capacity has fallen to 31 percent, and its sluice gate and bank - which are supposed to remain under water - can be seen above water level.

“A 60 percent storage capacity is required for planting for farms near the reservoir, but now it’s hard to do any farming with current water levels,” an official from the county office said.

But the drought is not expected to end anytime soon, and even though rainfall is anticipated from Sunday through Tuesday, the amount of precipitation is likely to be less than 10 millimeters (0.4 inches).

On Monday, the Korea Meteorological Administration reported that temperatures in April and May are anticipated to be higher than usual, though rain will stay at a similar level, keeping weather conditions dry.

Meanwhile, the Ministry of Land, Infrastructure and Transport and the state-backed Korea Water Resources Corporation (K-Water) are keeping an eye on water levels at local dams.

“We have a plan to reduce the set amount of water for local streams released from Chungju Dam in North Chungcheong and Soyang Dam if water levels continue to stay low,” a K-Water official said.

Dams must release a minimum amount of water in order for a stream’s ecosystem to thrive.

Disregarding that limit may lead to algal blooms.