While the Korean Basketball League (KBL) playoffs are heating up, Jeonju KCC Egis center Ha Seung-jin will have to settle for a spot as an observer after a nightmare of a season.

After completing his two years of mandatory military duty in social services, Ha, who is the only Korean ever to play in the NBA, returned to the court in October, saying that he was “hungry” to play basketball and would dominate the court.

However, things didn’t turn out as the 29-year-old planned.

This season, Ha averaged 12.6 points per game, fourth best among Korean players, and 9.8 rebounds per game, which was league’s second best record. But despite his performance, the Egis finished ninth, out of 10 teams. Egis coach Hur Jae resigned last month to take responsibility for the poor performance. 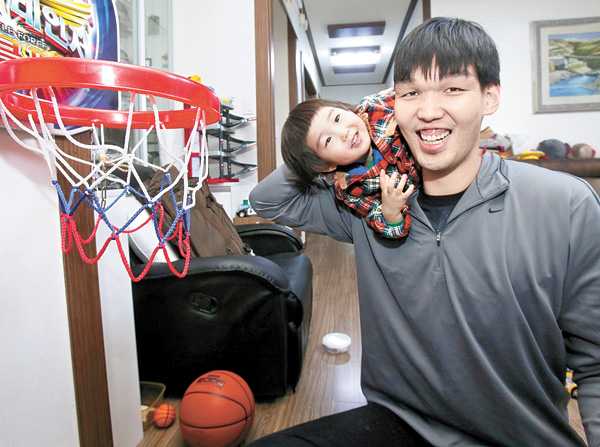 Jeonju KCC Egis center Ha Seung-jin poses with his son at his home in Suwon, Gyeonggi, on March 9. By Jung Si-chong

In another setback this season, Ha was involved in an argument with a female basketball fan who heckled him as he was leaving the court after suffering a nose injury during a game against Seoul Samsung Thunders on New Year’s Day. The former Portland Trail Blazers center later received a warning from the KBL.

But Ha said he has put all the bad memories behind him and finds peace at his home in Suwon, Gyeonggi, where he lives with his 3-year-old son Ji-hoon and his wife. The Yonsei University alumni says his family gives him the power to keep playing.

“On the court, I’m a villain like Goliath, but with my family, I’m David,” Ha said in an interview at his home earlier this month.

The 221-centimeter (7-foot-3) player said that in front of his son, he doesn’t feel like a giant. Ha said he is happy that his son is now old enough to tell other people that his father is a basketball player.

“I always feel sorry for my son because I can’t look after him during the season while my wife is also working,” he said. “That’s why I want to spend so much time with him after the season.”

However, when talking about what happened on the court this season, Ha’s expression was serious. The Egis had only 12 wins and 42 losses, an embarrassment for the five-time KBL champion. The team’s 12 wins in the regular season is the worst record in franchise history, beating the previous low of 13 wins in the 2012/13 season.

“My head went blank [after the season],” Ha said. “It’s really difficult for me because I couldn’t draw conclusions or come up with answers about it.”

This season, the Egis was considered a dark horse after signing national team point guard Kim Tae-sool and with Ha returning to the court. But the team was unstable and lost 10 games straight, tying a franchise record set in 2007.

“In my opinion, I think the players held back in their plays, thinking that someone will do their job,” he said. “After consistent losses, we lost confidence in our plays and we fell into a vicious cycle of failing to make shots.”

Ha said this season was different than 2010/11 season - when he was the MVP of the championship series - because he forgot about enjoying basketball.

“I always had a philosophy of enjoying the game and in the past, I was young and had lot of energy,” he said. “But this season, I was a married man and I was a veteran which meant I had to play with some heavy duties. I forgot to play basketball with joy.”

He said that coach Hur’s resignation made him feel worse. The center said he couldn’t forget the day that Hur held a meeting to tell the players about his decision.

“I’m a man who is honest about my feelings and because of him, I was able to adjust to the club without difficulty,” he said. “But I didn’t do well enough to meet his expectations or win his affection and I felt guilty for his resignation.”

Though the season was miserable, at least there was one thing that Ha welcomed on the court: playing with big rookies. This season, experts have said that the Rookie of the Year will be one of two big men - Goyang Orions’ Lee Seung-hyun and Kim Jun-il.

“It’s always welcome when these big men are becoming an issue,” he said. “But whenever I compete with them, I become a villain because fans enjoy it if the little guys beat the big guys.”

Ha, who was Rookie of the Year in the 2008/9 season, said that it is difficult to pick who will be the winner, but hinted that for him, Lee was more challenging to defend against because the 197-centimeter rookie sometimes played like a small forward.

“Other big men like Oh Se-keun, Kim Jong-kyu and Kim Joo-sung aren’t players who shoot three-pointers often, but since Lee throws three-pointers, it was difficult for me to defend him,” he said.

In the Incheon Asian Games last year, the Korean national team won the gold medal for the first time in 12 years. But Ha, who helped the team win a silver medal in the 2010 Guangzhou Asian Games, wasn’t included on the squad. But he said his national team career is not over.

“The national team is a place I can’t go on my own even if I want to, but I always have a desire to be there,” he said. “There are still many things that I haven’t shown on the national team.”

Before next season, Ha said that he will take a good rest so that his body can recover. The Bucheon-born player said his lower body and shoulders are not 100 percent fit, but he will work on his condition.

“I should not have succeeded this season because if I did, it would have been from only putting in a small amount of effort,” he said. “I must be different next season.”

Ha said he feels pressure to improve the next time around. The center hasn’t decided a goal for next season.

“I would definitely say the goal would be winning the championship in the past, but as I look back on this season, I’m humbled,” he said. “What I can say right now is that I want my team to be in the playoffs and reduce my vacation time, which I have a lot of this year.”