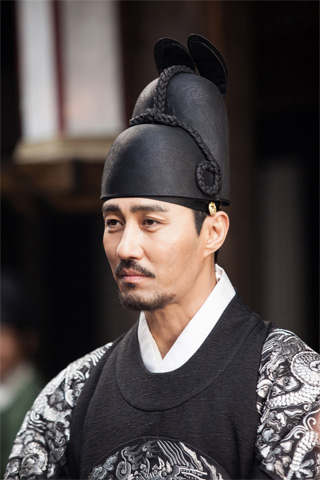 Cha Seung-won poses in traditional royal garments as he plays Gwanghaegun in the upcoming drama “Hwajeong” on MBC. Provided by Kimjonghak Production

Actor Cha Seung-won, who has been busiest showing off his cooking skills on entertainment shows recently, will go back to his original forte of acting in TV drama.

The actor is taking on the challenge of doing a period drama, “Hwajeong,” which is about Gwanghaegun of the Joseon Dynasty (1392-1910), the 15th king. Also known as Prince Gwanghae, he didn’t get a name for his reign as other kings did because he was deposed in a coup.

The drama, which deals with human ambition for power in the era through the many aristocrats actively participating in politics under Gwanghaegun’s regime, will start early next month on broadcaster MBC.

While Cha showed more of his down-to-earth side on entertainment shows recently, he says he will try to show a more serious side of him as he portrays a historical figure. Ilgan Sports, an affiliate of the JoongAng Daily, met with the actor on Monday to talk about how the filming was going for the new drama.

Q. What’s your point of view on Prince Gwanghae?

A. I’m trying to make the character as natural as possible. It would be too burdensome for me if I focused too much on making the character different from how other actors have portrayed him before. Many focus on charismatic features when they try to describe Gwanghae. But I personally want him to be seen as someone who has some deeper thoughts inside rather just trying to work his absolute power [as a king.] I hope if I put sincerity in, the audience will define what Cha Seung-won’s Gwanghae is like.

Did you do anything special to prepare for a period drama?

Since the drama is relatively long with 50 episodes, I think it is important to control my mental and physical condition. I’m trying to control myself so that I won’t be fed up too early on. I tend to be more entertaining when filming. That’s because this period drama talks about the chaos at this point in history and I think such a serious story can weigh my mentality down to a great extent. So I try to keep myself more cheerful by communicating more with other actors.

Which do you prefer, acting or being on entertainment shows?

Whether you do a drama or an entertainment show, it’s the same thing because you need to be sincere. But, I think I need to pay more attention to the finest details when I act, as I have to play someone else. When I do entertainment shows, I’m more down to earth and casual. It’s more burdensome to act, but acting a figure that has been part of the country’s history will make me a more mature actor. I’m half worried and half excited.

Is there any scene that you can’t wait to see on TV?

There is a scene I filmed recently, which will air towards the end of the first episode in which Prince Gwanghae faces his father King Seonjo. I think that scene will show the gist of what the drama is meant to deliver such as ambition for power. I think that would be the most powerful scene amongst the ones that I have filmed, and I’m most excited about that.