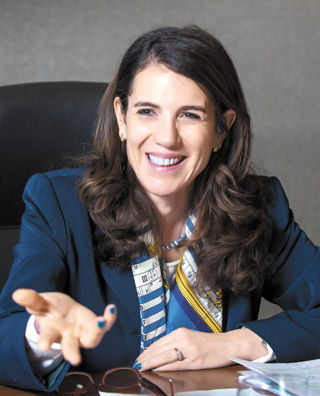 At last, the European economy has started to show signs of recovering, and at the heart of the progress lies three decades of efforts to promote research and innovation (R&I) in Europe, says Maria Cristina Russo, director of international cooperation at the Directorate-General for Research & Innovation at the European Commission.

Russo visited Seoul on Wednesday to attend the first EU Research & Innovation Day, a forum that attracted more than 400 European and Korean businesspeople, scientists and government officials to raise awareness of the importance of innovation.

The European Union has been highly active for 30 years in research and innovation policies, Russo said in an exclusive interview with the Korea JoongAng Daily. “During the economic downturn, from we are now recovering, we realized that R&I is the main way to stimulate the creativity of Europe to keep our workers productive and retain the European economic and social model,” said Russo. “R&I is important in boosting productivity and maintaining competitiveness.”

Even in 2013, when the European economy was still in the middle of a difficult economic situation, the 28 EU members held regular financial budget meetings to finalize investment plans for 2014-20, in which they increased nothing but R&I budgets, from 50 billion euros ($54.8 billion) to 80 billion euros, demonstrating the importance of research and innovation, she explained.

EU member states aim to spend 3 percent of their gross domestic product on R&I, including both the EU Commission’s R&I program and their own country’s R&I expenditures, according to Russo.

Besides constant spending on R&I, Russo emphasizes that international cooperation is more important than ever to improving the quality of research and innovation.

Q. How do you think science, technology and innovation can contribute to recovery in Europe?

A. We’ve seen big successes in increasing R&I spending with major achievements in R&I projects. Unfortunately, some members are lowering their overall R&I expenditures below the 3 percent spending target because they are able to reach their goal due to the economic downturn. But many others show a tendency to increase their R&I spending.

How do you view Korea’s creative economy initiative?

At the EU-Korea summit in 2013, I heard President Park Geun-hye speaking about the creative economy initiative. I was very impressed with the program and Park’s clear vision that Korea is already so advanced that its economic stimulus strategies depend on R&I. Also, I realized the Korean objectives in terms of R&I policies and global research cooperation are very similar to the EU’s in the way both parties push R&I policies as part of measures to boost the economy. This is the first time we have held this kind of event in Korea. We have similar research partnerships and similar events in other countries. But Korea is one of the EU’s most important partners in R&I. I was very impressed by the high level of participation.

What Korean industries interest the EU as far as cooperation?

So far, most of our cooperation has been in information and communication technology. In addition, nowadays we are highly interested in Korean health and medical technologies, biotechnologies, energy management systems, renewable energy and nanotechnologies. Meanwhile, Europe is strong in machinery, ICT, software, health, energy, transport and fintech.

Many Koreans still find it hard to grasp the concept of innovation. What do you think it means?

Have there been any impressive cases of innovation by Korean companies or researchers?

Over the past eight years, 74 Korean researchers from private companies, research institutes and universities have been participating in EU projects.

That is a big increase compared to 1999-2007, when there were only 27. Our aim is to bring in more Korean researchers. Each country has a different political context, but the same clear drive for innovation and creative economy. We would like to share and boost the effectiveness of research. ... The potential of Korea hasn’t been fully tapped, that’s why we’re here, to open up possibilities of cooperation.

Korea is the world’s No. 1 in R&D budget allocation as a percentage of GDP. Korea 12th in the world in terms of numbers of SCI [Science Citation Index] research papers published last year, but studies say Korean papers are falling behind in quality. What should Korea do to close the gap?

International cooperation. We have proof that when you publish a paper with an international partner, your paper is cited more. ... Our Horizon 2020 program is the only program in the world which is completely open to all participants from third countries. When you don’t have counterparts in Europe, you can find them from other parts of the world through this program.