Fight’s haul sure to smash records

Fight’s haul sure to smash records 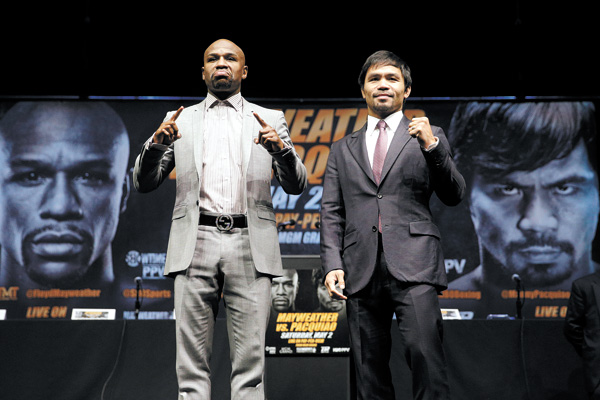 Floyd Mayweather Jr., left, and Manny Pacquiao of the Philippines pose after a news conference March 11 in Los Angeles. [AP/NEWSIS]

LAS VEGAS - The first ticket has yet to be sold, but the richest fight in boxing history is getting richer by the day.

New estimates show Floyd Mayweather Jr.’s payoff for fighting Manny Pacquiao could easily be $180 million, up from earlier predictions of $120 million. Pacquiao gets the short end of the purse, but even that is expected to be well over $100 million.

The money is staggering, though not exactly unexpected. Five years of waiting seems to have only piqued the public’s demand.

“For whatever it’s worth, the buildup over these years has certainly enhanced the fight,’’ said promoter Bob Arum. “Everybody knows about it now, even people who don’t follow boxing. Plus we have a good economy, unlike in 2009 when people were out of work and didn’t have the money to spend.’’

Fans will certainly have to pay a price to see the May 2 welterweight title bout, especially those lucky enough to score a ticket inside the MGM Grand arena. Ticket prices range from $1,500 in the upper deck to $7,500 at ringside - and only a small percentage of the tickets will actually be put on public sale.

Arum said Tuesday the gate at the MGM alone will be more than $72 million, obliterating the previous live gate record of $20 million in Nevada set by Mayweather’s 2013 fight with Canelo Alvarez.

Promoters announced a deal Tuesday with Sky Sports to televise the fight on pay-per-view in England and parts of Europe, part of another $35 million expected to come from foreign rights. Add in $10 million in sponsorships - Tecate beer will be the main sponsor - and the fight will gross more than $100 million before a single home in North America buys the pay-per-view.

Less certain is how many people will spend what is expected to be $100 or so for pay-per-view in the United States, but that could easily break records, too. Mayweather’s 2007 fight with Oscar De La Hoya currently tops the charts with 2.44 million buys, but many think Mayweather-Pacquiao could get more than 3 million homes despite softness in the pay-per-view market in the past few years.

Cable networks HBO and Showtime have yet to announce the pay-per-view price, saying they are still in negotiations with cable systems and satellite providers. “You get to this level where you’re making nine figures in 36 minutes,’’ Mayweather said at the fight press conference this month in Los Angeles, “and you have to be a winner.’’

Judging from the money on the table in this bout, it’s hard to find a loser.