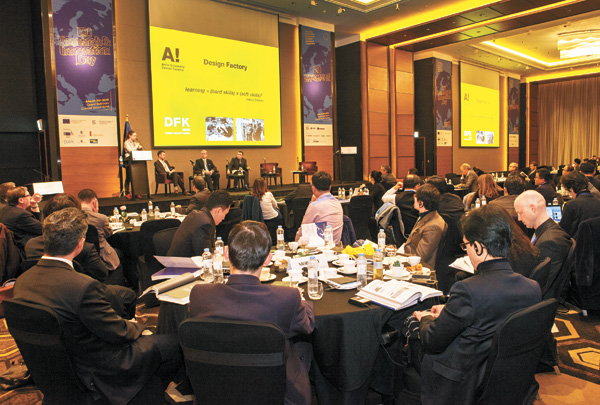 Korea and European Union nations will become closer innovation partners under similar government initiatives to achieve creative economies based on science and technology.

At the first EU Research & Innovation Day hosted by the EU Delegation to Korea and European Chamber of Commerce in Korea (ECCK) in Seoul on Wednesday, participants agreed on the importance of innovation as a key growth factor for the sluggish global economy.

As many as 400 government officials, businesspeople and researchers from EU countries and Korea gathered to share ideas about innovation.

“Research and innovation values lie in our [EU] political agenda to address technological challenges, push economic growth and create jobs,” said Tomasz Kozlowski, EU ambassador to Korea. “Korea is similar in recognizing the significance within the creative economy agenda. These objectives can’t be achieved without international cooperation. Developing a scientific relationship with Korea is highly important to Europe.”

Korea has been a significant strategic partner in Horizon 2020, said Kozlowski, being the first Asian partner to do such agreements, including technology, innovation, and science and technology education.

The European Union and Korea will recognize that more research activities and active communication among governments, scientific institutions and businesses enable practical cooperation, he added.

The European Union is a world leader in research and innovation, representing 24 percent of world expenditures on research, 32 percent of high-impact publications and 32 percent of patent applications, according to the EU Commission. With the largest internal market in the world, the European Union also is home to many of the world’s leading innovative companies and has a leading position in many fields of knowledge and key technologies, such as health, food, renewable energy, environmental technology and transportation.

Europe’s flagship strategy for research and innovation can be described in one phrase: Horizon 2020.

It can be compared to Korea’s creative economy initiative under the Park Geun-hye administration, which promotes the growth of start-ups and young entrepreneurs introducing new businesses based on technology.

“The EU-Korea Free Trade Agreement and diplomatic relationship will contribute to strengthening cooperation,” said Toni Schreibweiss, vice president of ECCK. “The partnership with Korea will focus on collaborating each side’s specialties in various areas like ICT, energy and creativity.”

“We have embarked on the creative economy project as a new economy booster agenda. I thought the European version of creative economy is very similar to that of Korea,” said Lee Seok-joon, vice minister of science, ICT and future planning. ”As European cities have their own technological strengths in which universities and small businesses collaborate in research, Korean creative economy innovation centers, which recently opened at seven locations, will play the same role.

Since signing a memorandum of understanding in 1992, Korea and the European Union have been working together on research and innovation. Cooperation between the two increased when they signed an agreement on scientific and technology collaboration in 2006. Under the agreement, Korean researchers are able to participate in EU projects more than before.

“Korea and the EU have strengthened their cooperation in many basic research areas such as biotechnology and energy storage,” Lee said. “As President Park’s visit to EU member countries in 2013 marked a declaration that promised cooperation among research institutes and businesses, the global research partnership between the governments of Korea and EU member countries will mean new opportunities at a higher level.”