Park meets with artists in a bid to engage public

Park meets with artists in a bid to engage public 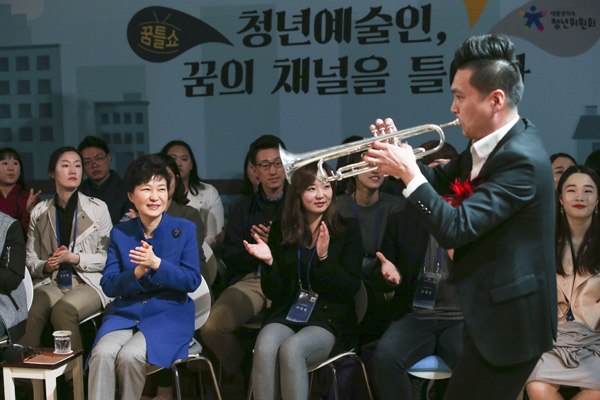 President Park Geun-hye, second from left in front, meets with a group of young artists on Wednesday in a concert hall in Daehangno, Seoul. By Park Jong-keun

President Park Geun-hye met with a group of young artists on Wednesday to listen to their thoughts on the future.

According to the Blue House, she emphasized the importance of the government providing more opportunities for them.

“The meeting was meaningful because Park was communicating with the young artists, who are following their dreams despite the difficult employment situation,” the presidential office said in a statement.

In addition to those talks, the president also observed performances they presented, which included a concert, a play and a dance.

The meeting appeared to be the latest in a series of efforts by the president to better communicate with the public, as she has often been criticized for being out of touch.

Throughout this year, Park has increasingly made moves to more actively engage with the people. Replacing her chief of staff in February was seen as a first step.

On Feb. 27, she named Lee Byung-kee, the head of the nation’s main intelligence agency, as her new chief of staff, filling the top post of her secretariat after a 10-day vacancy.

Lee replaced Kim Ki-choon, who had become a liability for the president and was considered a source of problems at the Blue House, which included poor public communication skills and numerous botched appointments.

The next move came earlier this month, when Park invited the heads of the ruling and opposition parties to the Blue House to improve communication with the legislature. It was the first time Park and opposition leader Moon Jae-in, rivals in the 2012 presidential campaign, sat down for a substantial discussion since their televised presidential debate on Dec. 16, 2012.

During her trip to the Middle East this month, Park also met with reporters aboard her plane twice, giving the press a rare opportunity to directly communicate with her. Although she had addressed accompanying reporters onboard on previous trips, it was the first time she talked to them twice and discussed her trip and other sensitive domestic political issues in detail.

These efforts follow a significant drop in her approval rating. According to Real Meter’s weekly poll, Park’s approval rating decreased to 39.4 percent during the second week of January, falling below 40 percent for the first time. It dipped further to 31.8 percent in the first week of February.

But in recent weeks, it has once again started to pick up, standing at 42.7 percent during the third week of March.