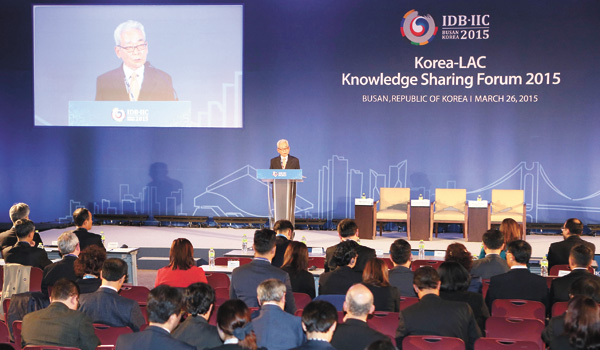 BUSAN - Businessmen, renowned economists and high-ranking government officials gathered for the start of the annual meeting of the Inter-American Development Bank (IDB) in Busan on Thursday, the largest-ever Latin American business event to be held in Asia.

Approximately 4,600 people registered for the four-day event at Bexco jointly hosted by Korea’s Ministry of Strategy and Finance and the IDB on the sidelines of the IDB-IIC Annual Meeting of the Board of Governors. Participants also include about 3,000 finance ministers, high-ranking officials, economists and researchers from Latin America as well as representatives from international finance organizations.

The events at the annual meeting include business forums and cultural events in an attempt to boost relations between the two regions on opposite sides of the world.

One of the main events on the first day was one-on-one business summits between companies from both regions, arranged in advance by the IDB and the Korea Trade-Investment Promotion Agency (Kotra).

“I have met two Korean potential buyers but we have to meet again, so I am planning to stay here until April,” said Socrates Benjamin Alvarez, head of an organic food trader called Agro Exports Caribe World based in Dominican Republic. “Through this event, small entrepreneurs from Latin America can meet with big people in Asia.”

For owners of Korean small and medium-sized enterprises, the meetings with Latin American businessmen were also a rare welcome opportunity.

“I have met five Latin American businessmen and one of them, from Argentina, asked me to send two samples of my products, $2,000 each,” said Jung Young-chan, owner of Samjung Energy and Engineering, which makes hybrid solar and wind power facilities. “This kind of meeting saves a lot of time and costs for us to communicate with overseas buyers.

“Although our meeting lasted for less than 10 minutes, I gave them USB drives containing information on my products and contact information so we can keep in touch,” he added.

Another major opening day event was a series of economic forums called “Knowledge Sharing Forums,” attended by economists and researchers from 14 major institutes in Latin America and Asia. The participants shared the conclusions of their studies in areas such as sustainable energy, the labor market, and trade and investment.

“The growth rate of trade between Korea and Latin America recently is quite impressive, an average of 17 percent annually since 1990,” said Antoni Estevadeordal, the manager of the Integration and Trade Sector of the IDB, in an interview with Korea JoongAng Daily.

“It’s a little bit lower than China, about 20 percent annual growth, but higher than Japan.”

For the past decade, trade between Korea and Latin America has expanded from $18.3 billion in 2004 to $54.2 billion in 2014, according to statistics from the Finance Ministry. Korea’s ratio of trade with Latin America also increased, from 3.8 percent to 4.9 percent over the period.

“The middle class population in Latin America is growing and they are becoming more sophisticated consumers,” Estevadeordal said.

For example, LG Electronics has successfully catered to the continent’s middle class market. It accounts for 15 percent of company’s total sales, according to an IDB report.

“Beyond trade and investment, we can share technology not necessarily related to trade,” Estevadeordal said. “For instance, we will discuss Korea’s management in energy and cities, sustainable cities … as Korea has lots of experience in this sector.”

The second day of the event will include business forums attended by about 200 high-ranking officials and businessmen from Latin American, including Luis Alberto Moreno, president of the IDB and Enrique de la Madrid, CEO of Bancomext, a state-owned Mexican bank. From the Korean side, Vice Finance Minister Joo Hyung-hwan and Lee Duk-hoon, chairman of the Export-Import of Korea, will also attend.