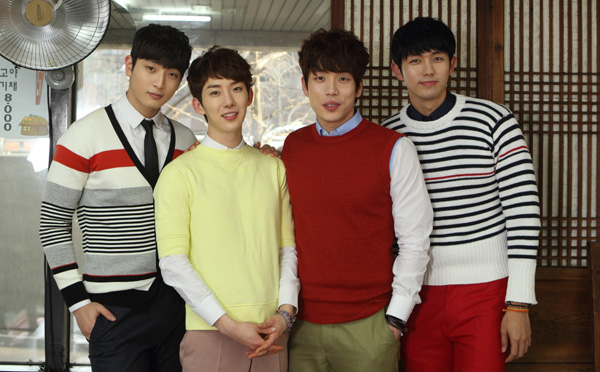 K-pop boy band 2AM disbanded as two of its members, Lim Seul-ong, far right, and Jung Jin-woon, far left, did not extend their contracts with their agency JYP Entertainment.

Jo Kwon, second from left, will reportedly remain at JYP while Lee Chang-min, the other member, has six months left until his contract expires.

According to Ilgan Sports, an affiliate of the Korea JoongAng Daily, Lim will head to the agency Sidus HQ, home to many actors and actresses, because he wants to focus on his acting career. Jung decided to sign with Mystic Entertainment, run by singer and producer Yoon Jong-shin.

Jung will pursue both singing and acting at Mystic.

“JYP respects individual artists and the agency has supported Lim and Jung until they found new agencies,” an industry insider told Ilgan Sports on Thursday.

The quartet was loved for its heart-wrenching love songs.