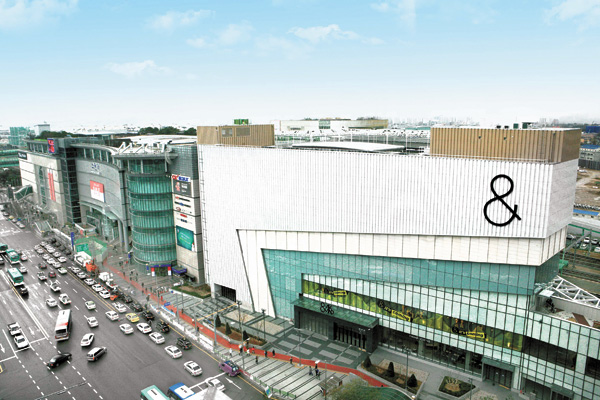 The Suwon branch of AK Plaza attracts a wide range of consumers as it is located at Suwon Station, a major transportation hub that serves a bus terminal, a KTX line and two lines of the Seoul subway. Provided by the company

The landscape of the department store industry is shifting, as Aekyung Group’s department store AK Plaza has emerged as a new major player, beating out the Galleria Department Store and solidly securing fourth place in sales for the first time in two decades.

AK Plaza’s business strategy involves expanding its locations into some of the busiest transportation hubs. All six AK Plaza locations are located near a subway station or bus terminal.

Aekyung Group PR official Kim Jae Wook said there are a total of five branches. The Wonju branch is located at a bus terminal, while the rest of the stores are connected to subway stations.

“We believe that the locations give us a great advantage because we can attract different groups of people, such as business people, students, commuters and stay-at-home moms,” said Kim.

Kim said the AK Plaza’s strategy also includes analyzing the major clientele groups of each branch and providing products that reflect the consumer behavior of each group.

“For example, the primary clientele for the Suwon branch is college students because it is located near universities ” said Kim.

The business strategy appears to be successful in spite of unfavorable conditions in the consumer market. Over the past three years, AK Plaza achieved an average sales growth of eight percent, a notable feat when the bigger players recorded less than five percent growth last year.

On the contrary, Galleria’s business strategy focuses on catering mainly towards elite consumers in affluent areas. Although the retailer has six branches, more investment has gone to the Apgujeong location.

Last year, the Apgujeong location renovated its luxury goods section and introduced less common brands and products in the redesigned section. The luxury goods section, which comprises a large portion of the branch, contains two sections - an East and West Wing.

The location also opened a watch section and a multi-brand bag shop on the first floor of the East Luxury Hall .

The Galleria has attributed the decline to the store’s temporary closure during the renovations, as the West Luxury Hall closed for more than 60 days last year.

“We believe the loss occurred because the location closed for so long,” said a Galleria spokesperson.

While the Galleria is struggling, the Aekyung Group is diversifying its range of services by entering the hospitality business, opening its first hotel, the Novotel Ambassador, next to the Suwon location.

The new hotel is located near Suwon Station, which serves Seoul Metro line 1, the national Gyeongbu line, the Shin Bundang line and the KTX bullet train.

Suwon Station is the second busiest station after Seoul Station, drawing an average of 300,000 people every day.

“We predict that opening the hotel can create synergy and boost sales at the store,” said Kim.