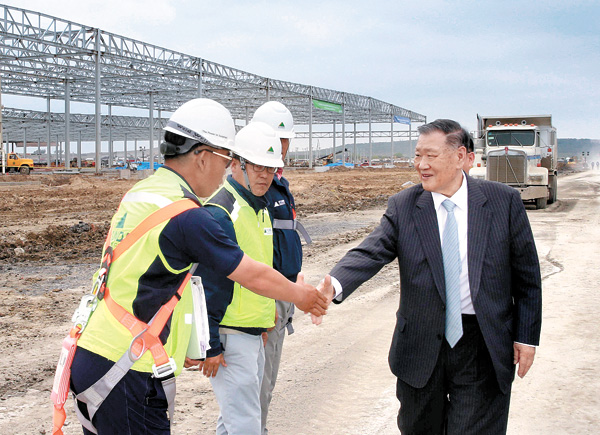 Hyundai Motor Group Chairman Chung Mong-koo, who is on a five-day business trip to America, visited the construction site of a Kia Motors plant under construction in Mexico on Thursday as part of his work to expand the company’s market share in the region.

The chairman was briefed by local directors about Kia Motors’ sales and marketing strategies after checking out the progress of construction at the plant near Monterrey.

“Building this plant in Mexico was our optimum choice to provide a new growth engine for the future and for survival in the tough global market,” Chung said. “By building a factory that has good production competitiveness, we need to establish a base to increase our presence not only in Central and Southern America but also in the North American market.”

Mexico is considered a good market for global trade because it is part of the North American Free Trade Agreement (Nafta) and also has free trade agreements with 44 countries, including nations in Central and South America. These pacts mean Kia does not have to pay tariffs on 10 percent of the vehicles it produces in Mexico if the cars are sold in countries covered by Nafta.

Since labor costs in Mexico are relatively lower than other nations and productivity is high, many global automakers such as Nissan, GM, Volkswagen and Chrysler also operate production lines there, and BMW, Daimler and Renault-Nissan have recently announce plans to build factories there.

Kia Motors will start selling cars in Mexico in July, with the K3 sedan as one of the main vehicles. It will be sold as the Forte. Since the new plant is expected to start operations in the first half of next year and will be used to produce the vehicle.

Since the new plant will have a production capacity of 300,000 units per year, Kia Motors’ total production capacity will rise to 3.37 million units - 1.69 million cars in Korea and 1.68 million units overseas. The company said it is necessary to increase its ratio of overseas production, currently at 44 percent, because 85 percent of the company’s sales last year were made overseas. The average overseas production ratio for other competitors is 75 percent, the company said.

Kia is expecting its regional sales to rise due to the new plant. Hyundai Motor’s sales in Central and South America had nearly doubled, to 360,000 units, after it built a plant in Brazil in 2012.

“Since this is Kia Motors’ first time stepping into Mexico, we need to provide strategies that can satisfy local consumers’ needs,” Chung said. “We need to secure market competitiveness by doing several things including developing a customized model for the country.”