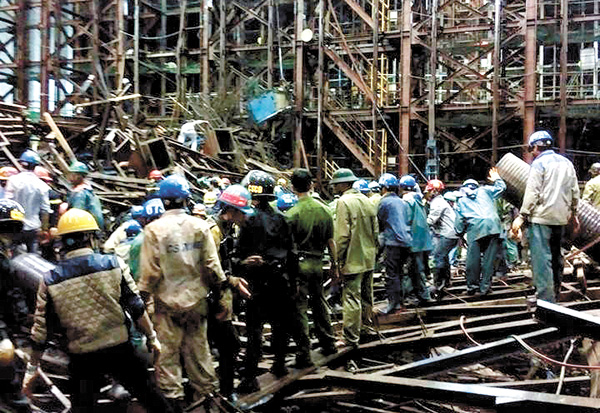 At least 14 people were killed and 27 others injured when scaffolding collapsed at a construction site of a seaport breakwater project by Samsung C&T Corporation in central Vietnam on Wednesday.

Samsung C&T Chief Executive Officer and President Choi Chi-hun headed to Vietnam Thursday morning after he was told of the accident and will stay until he finds out the exact cause.

The company said that all the victims were Vietnamese subcontractors hired to work on the project in Ha Tinh Province. The scaffolding, 30 meters (98 feet) by 40 meters with a height of 5.7 meters, was in a workspace that was 34 meters above ground. It suddenly collapsed around 7:50 p.m. Wednesday. A total of 43 workers were working.

Local media outlets reported that 28 workers were injured, but the company later corrected the number to 27, saying one person was counted twice.

The company said two workers may be trapped in rubble and that it wasn’t clear whether they were buried or rescued at press time.

“We will have exact numbers when all the wreckage is removed,” said a spokesman of Samsung C&T. “We will fully cooperate with Vietnamese police and rescuers in order to help cope with the accident and also will try our best to make compensation to the victims.”

The company has been operating the project since February 2012. It is scheduled to be completed in May 2016.

Dinh Ninh Dan, 27, one of the survivors, said the workers were cleaning a frame for a giant concrete block for the breakwater when the scaffolding collapsed. There were more than 40 workers on the scaffolding at the time of the collapse.

He said nearly an hour after they started work, the scaffolding shook twice and many workers panicked and began running to an elevator before someone said there was no problem.

“After 10 more minutes, the scaffolding, which was about 20 meters high, suddenly collapsed. I quickly grabbed an iron bar but fell free,” Dan told the Associated Press by telephone from Ky Anh General Hospital in Ha Tinh Province, where he was being treated for hip pain along with eight others who suffered lesser injuries.

“People were screaming, calling for help from the rubble,” said Dan. “I was very lucky to survive.”

The Son Duong seaport is part of the Vung Ang economic zone where Taiwan’s Formosa Plastics Corporation is building a steel complex.

The site was the scene of an anti-China protest last May in which three Chinese nationals were killed following China’s deployment of an oil rig in disputed waters.