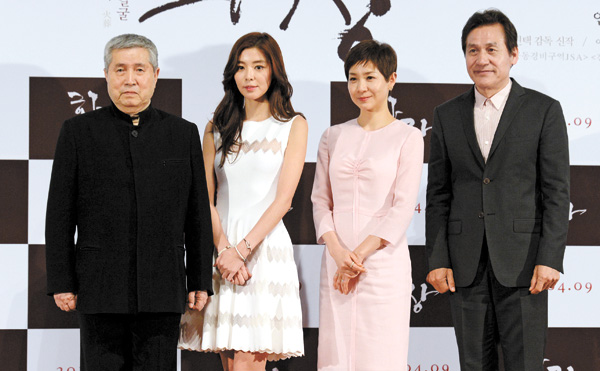 From left, director Im Kwon-taek and the cast of his 102nd film, “Revivre,” Kim Qyu-ri, Kim Ho-jung and Ahn Sung-ki, pose for a photo shoot after a press conference held on March 17 at Lotte Cinema in Gwangjin District, eastern Seoul. [NEWSIS]

Realism was the key for illustrious director Im Kwon-taek when he took on the challenge of adapting Kim Hoon’s acclaimed novel “Hwajang” to the big screen.

After touring the world last year, being invited to prestigious film festivals in Venice, Toronto and Berlin, his 102nd film, “Revivre,” is finally opening in theaters nationwide on April 9.

The Korean title of the movie is still “Hwajang,” which means both “makeup” and “cremation.” It hones in on the emotional torment experienced by a married middle-aged man who is being seduced by a young, beautiful newcomer at work while his wife is dying of a brain tumor.

Experienced actor Ahn Sung-ki takes on leading role of Sang-moo, a marketing executive at a cosmetics company who is both a faithful husband and a hard-working man shuttling between his job and the hospital. 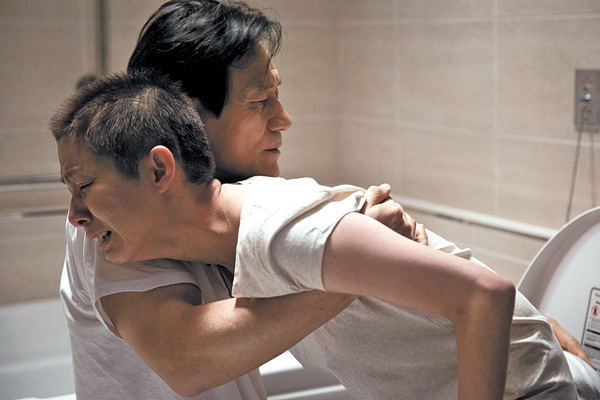 Kim Ho-jung, right, plays a dying wife, while Ahn Sung-ki is a faithful husband being seduced by a beautiful newcomer at work. Provided by the distributor

“Being bereaved of a wife could be considered common or uncommon,” said Im during a press conference held on March 17 at Lotte Cinema in Gwangjin District, eastern Seoul.

“But I thought that a man trying to do his best for a fading wife facing death was beautiful. I also thought there are more men than we realize hiding their inner desire for seduction and possession out of shame.”

The director added that he wanted to depict both scenarios.

Im has won international acclaim in the past for expressing Korea’s traditional beauty with unique editing and aesthetically pleasing visual elements throughout his films.

However, for “Revivre,” Im let go of a large part of his usual style and focused on making the movie more realistic.

“I have filmed more than 100 movies, but this film made me want to ask the audience how they watched it,” he said, admitting that it was by far the film he felt most uncertain about.

“When I first read Kim Hoon’s original novel, I instantly wanted to convey his powerful and speedy sentences on the screen,” Im added.

“I was distressed about the sense of defeat I would feel when I failed. Even when I was in the editing process, I couldn’t tell if I was doing it right.”

His fixation led to one of the most controversial scenes in the movie where Kim Ho-jung, who plays the sick wife, exposes a lot of skin when Sang-moo is cleaning her up on the toilet.

“I originally filmed it showing only the top half of her body. The audience could have guessed what was going on in the bottom, but it went against my goal of making [the film] heart-wrenching by ensuring it was as realistic as possible,” Im explained.

“So I asked actress Kim if I could film it again showing the whole body and she said yes after a few hours.”

The 47-year-old actress also shaved her head for the film. She said she thought steps such as these were necessary to portray a woman heading towards death.

“The bathroom scene was powerful and difficult. I tried to express it as beautifully as possible,” she said.

“Director Im already had in mind how to use me, and actor Ahn was also very attentive of me. The shooting itself wasn’t as hard as I expected.”