Calls for changes in U.S. textbook seen as ‘charade’

Calls for changes in U.S. textbook seen as ‘charade’ 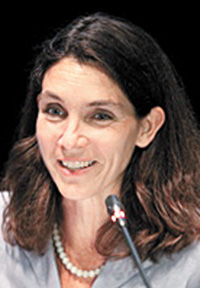 An American historian denounced calls by a group of Japanese scholars for a U.S. publisher to revise a description in its textbook concerning Japan’s forced mobilization of thousands of young women into military brothels during World War II, referring to it “as yet another political charade.”

Alexis Dudden, a history professor at the University of Connecticut, recently led a group of 20 U.S. academics in publishing a letter condemning the Shinzo Abe government’s tendency toward historical revisionism - specifically downplaying its wartime atrocities - especially by suppressing the information presented in its history textbooks.

Last week, a right-wing group led by historian Ikuhiko Hata of Nihon University held a press conference to urge American publishing giant McGraw-Hill Education to “correct” its text regarding the women, who are euphemistically referred to as “comfort women.”

In an email exchange with the JoongAng Ilbo on Wednesday, Dudden said the Japanese scholars in question “have turned this moment into yet another political charade, again attempting to distract the listener away from the history at the core: a horrendous violation of the human rights of those who suffered in this system of state-sponsored violence.”

This is the latest move by Tokyo to attempt to pressure McGraw-Hill over a history textbook that described in detail Japan’s record of wartime sexual slavery, and are just a part of continuing lobbying efforts in Washington that have gone on since November.

McGraw-Hill Education has refused to revise its textbook.

Addressing reporters at the Foreign Correspondents’ Club of Japan on March 17, Hata compared the comfort women to prostitutes.

“There are women in Amsterdam who sit in windows displaying their services and in Japan we have Soapland, which is part of the sex trade,” he said.

“Prostitutes have existed at every time in human history, so I do not believe that the comfort women are a special category,” Hata added.

The textbook, entitled “Traditions & Encounters: A Global Perspective on the Past,” contains text that states: “The Japanese army forcibly recruited, conscripted, and dragooned” up to 200,000 women aged 14 to 20 “to serve in military brothels, called ‘comfort houses.’”

Dudden, an expert on modern Japan and Korea, acknowledged Hata is the only historian among the 18 other signatories in the movement and described the press conference as “a big public display of the letter they were sending to the U.S.-based McGraw-Hill publishing house.”

The material Hata’s group put together to prove their case includes a government-produced translation of the sentences in the textbook in question, which has, “Translated by the Foreign Ministry” on the page itself, she added.

“Whether or not the Japanese government played any role, the fiasco is thoroughly strange from an academic point of view,” Dudden continued.

Hata is one of the signers on Abe’s committee to draft a new statement on the 70th anniversary of the end of World War II, she pointed out.

Observers are cautiously watching to see if Abe will uphold a previous apology made by Prime Minister Tomiichi Murayama in 1995 for Japan’s wartime aggressions.

She said Hata’s efforts were a move to “twist focus away from the truly terrible core history that the comfort women endured.”

Dudden added that it was petty for the Hata’s group to find 19 scholars, in an apparent attempt to match the number of original American signatories.

“It is rather too random not to appear mirrored,” she said.

In the final letter to the publisher criticizing historical revisionism by the Abe government, there were 20 American signatories with the addition of Andrew Gordon, a modern Japanese history professor from Harvard University.

Dudden added that the group’s focus is not on the content of the McGraw-Hill text, as Hata’s is, but that it aims to reach a consensus that “terrible history happened” and cannot be denied.

She also underscored that history scholars from Japan and anywhere else should be able to do their work “without the strange possibility of being branded ‘anti-Japanese’ for doing so.”