Coup pivots on a tense standoff at military HQ

Coup pivots on a tense standoff at military HQ 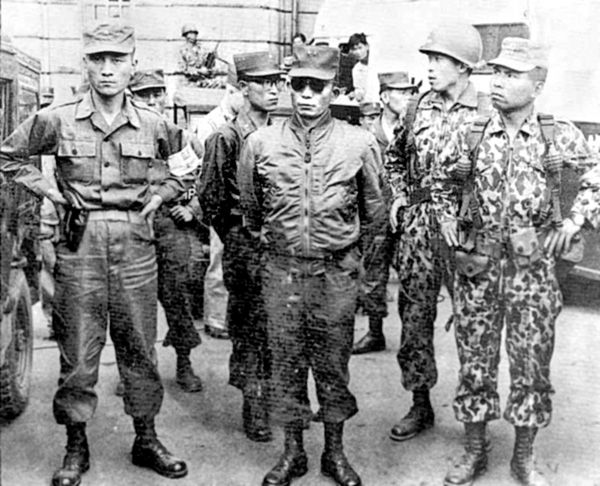 Park Chung Hee, center, attends a rally by military academy cadets two days after the coup. To his left is Cha Ji-cheol, who later served as head of the presidential security service. This image of Park has become an iconic depiction of the leader with an iron fist. Park and Cha were both killed by Kim Jae-gyu, head of the intelligence agency, during a dinner on Oct. 26, 1979. [JoongAng Photo]

This is the 11th in a series of articles on the life and times of Kim Jong-pil, a two-time prime minister, based on extensive interviews with the 89-year-old. This installment looks into the fateful 24 hours of D-day, May 16, 1961, when Park Chung Hee set in motion a long-planned military coup, which Kim describes as a revolution. Hours after a standoff with then-Army Chief of Staff Chang Do-young, Park had Chang bow to his demand to accept the coup and serve as martial law commander.

At 4:15 a.m. on May 16, 1961, the Marines 1st brigade crossed a Han River bridge and made its entry to Seoul. Park Chung Hee, who led the breakthrough, rushed to a printing press where I was making copies of the declaration of promises to the nation by the revolutionary forces. When I saw him, he was filled with both rage and excitement.

After all, the Army chief of staff had ordered military police to shoot at him on the bridge.

Park checked every word in the declaration. After giving a green light, Park and I rushed to the Korean Broadcasting System’s radio headquarters on Mount Namsan. There was no television station at the time. 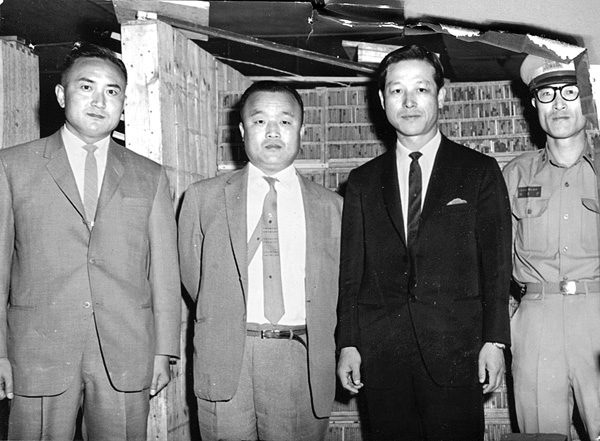 Kim Jong-pil, second from right, poses for a photo during a visit to a printing press on the first anniversary of the May 16 coup. The press printed copies of the declaration of promises to the people by the revolutionary forces. To Kim’s left is press owner Lee Hak-su, who did the job for free. Provided by Kim Jong-pil

The radio station staff was alarmed at our arrival. We found anchor Park Jong-se, who was hiding under a desk.

He was shivering thinking that North Korean spies had invaded. I tried to calm him down by patting his shoulder and showing him the declaration. He looked stunned when he read the word “revolution.”

“I need you to read this statement with composure,” I said to him. “Start off by saying, ‘I have very important news to deliver to the nation,’ please.” Revolutionary forces brought back technicians who had scurried away earlier to get the statement on the air.

Park Chung Hee and I watched from outside the studio. The national anthem was played and Kim started reading the declaration.

“The military, which has been acting with prudence from the sidelines, has finally taken action from midnight tonight. It took control of the administrative, judicial and legislative branches and has organized a military revolutionary committee.”

Kim recovered a sense of calm in his voice as he read the rest of the declaration. That radio broadcast struck down the old set of rules and values. I felt at the moment that the revolution was now halfway complete.

After the broadcast, the military forces that were on our side launched uprisings and took administrative offices outside of Seoul.

After the broadcast, we moved to the heart of the military: its headquarters, where Army Chief of Staff Chang Do-young was monitoring the situation.

Sometime during that fateful dawn, Park sent a letter to Chang in which he said, “I am very sorry that we did not inform you of our action in advance nor earn your approval but carried this out on our own. .?.?. But if our choice turns out to have damaged the national interest, we all are ready to commit suicide in repentance.”

About 1,300 revolutionary forces from the 6th corps artillery unit had circled the Army headquarters and were poised to take over its main building, where Chang was, at any time they were given the order. Tension was mounting minute by minute in the dark.

Park went to the second floor of the headquarters to have a face-to-face meeting with Chang.

Park asked him to lead the revolutionary forces.

Chang had the top military leadership in his office, including the three heads of the Army, Air Force and Marines.

Park also brought his own military men, who put their lives on the line that night. They were armed.

“We are ready to die tonight,” Park announced. “We all wrote farewell notes and clipped our fingernails to leave behind for our families. I ask you again to join us.”

Chang refused again. “Your action tonight already has given strong warning to the Chang Myon administration,” he said. “Your demands have been heard. Go back to your military bases now.”

Chang’s remarks enraged revolutionary officials in the room. Some even had their hands on their pistols and were ready to use them. It was a moment that could have determined our fates. It certainly was affecting the fate of the nation.

Chang said he could not make that decision alone but needed to consult with then-President Yun Bo-seon first.

With no progress between the men, I left the headquarters and returned to KBS. I spotted an anchor. Grabbing his arm, I showed him the declaration of martial law that I had drafted earlier to read on the air.

At 9 a.m. the declaration of martial law was aired.

“In order to bring stability, the military revolutionary committee declares martial law that takes effect as of 9 a.m. on May 16. All indoor and outdoor demonstrations will be banned in accordance with martial law. .?.?. The revolutionary committee took control of all the functions of the Chang Myon administration as of 7 a.m. May 16. Parliament was dissolved at 8 a.m.”

The declaration was read out in the name of Chang Do-young as martial law commander.

Of course Chang did not approve of the declaration I had drafted. But I had no choice but to make people believe the revolution was being done by the highest command of the military. It was an era in which the public only had newspapers and radio for information.

That radio announcement led people to believe the revolutionary forces had already taken over the government.

As hours went by, the confrontation at Army headquarters began to shift in favor of the revolutionary forces. Chang’s forces began to accept the fact that the revolution had succeeded, setting in motion a new set of laws.

Yun said he would not ratify the marital law. But he whispered to himself, “What had to happen finally happened.” I think Yun was acknowledging the need for change at a time of national chaos with a leadership incapable of bringing change.

Thirty minutes later, U.S. Forces Korea Commander Carter Magruder issued a statement that expressed support for the Chang government, saying the military coup bore no legal legitimacy. It was no surprise that he rebuffed our revolution because he had the authority to command the Korean military.

But I figured his statement would not alter the revolution we had begun.

During his meeting with Magruder, Yun refused to mobilize forces to counter the revolutionary forces because he didn’t want bloodshed.

Army Chief of Staff Chang finally succumbed to our demand and agreed to accept the role of martial law commander at 4:30 p.m.

At 10:30 p.m., Yun went on the radio to urge Prime Minister Chang, who was hiding at Carmel Monastery in Hyehwa-dong in Seoul, and his cabinet to deal with the unfolding situation.

D-day ended with Yun’s announcement. We were just one step away from declaring irreversible victory.