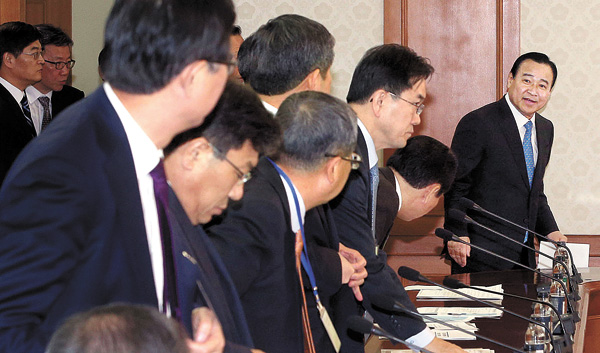 Prime Minister Lee Wan-koo, right, enters the meeting hall Thursday at the Central Government Complex in central Seoul, as participants stand in a sign of respect. Present were four ministers and the heads of 17 state-run agencies, who are supposed to attend the meeting to discuss reform in state-run agencies. By Kang Jung-hyun

Prime Minister Lee Wan-koo reportedly admonished Foreign Minister Yun Byung-se for being absent from a meeting last week over which he was presiding, in what appeared to be a step by the new premier toward tightening his grip over the cabinet.

On March 18, Lee oversaw the 17th meeting of the National Committee on Investigating Abductions during the 1950-53 Korean War at the government complex in central Seoul.

The gathering was about to conclude, with participants coming to the decision to add another 175 people to a list of nearly 2,000 South Korean civilians identified as having been forcibly taken to the North, when the prime minister took the microphone, according to sources familiar with the situation.

“Where is the foreign minister?” Lee asked.

Vice Foreign Minister Cho Tae-yong, who was standing in for Yun, replied that the top diplomat was meeting with a foreign dignitary.

Lee then asked the whereabouts of Seoul Metropolitan Police Agency Commissioner Kang Shin-myung. Kang’s stand-in, Lee Sang-won, the deputy commissioner of the Seoul police agency, answered that his superior was absent because he was attending a Korean National Police University graduation ceremony.

At this, Prime Minister Lee lashed out.

“It’s not like we are all attending this meeting today, myself included, because our schedules are so free. Defense Minister [Han Min-koo] is swamped by the Thaad issue, but he still came!” he said, referring to the recently heightened debate over whether Seoul should agree to the deployment of the U.S.-led Terminal High Altitude Area Defense system in Korea.

The prime minister was said to have told Vice Foreign Minister Cho and Seoul Police Deputy Commissioner Lee to report back to their bosses and “correctly convey” his message.

This was the first time Lee presided over the wartime abductions committee since being appointed prime minister. It was attended by government officials and civilians, including the families of the abducted.

Including the prime minister’s staff, 30 people attended the committee meeting that day.

Of the six governmental officials on the committee, Foreign Minister Yun, Commissioner Kang and Chong Jong-sup, the minister of government administration and home affairs, sent their deputies in their place.

Chong’s absence, however, was due to a scheduled business trip to Africa, which he communicated with the prime minister’s office ahead of the meeting.

He had also earlier conveyed that he would be sending his vice minister, thereby avoiding being called out in Lee’s public attendance check.

But Lee appeared to disregard that custom, and is likely to require ministers to attend committee meetings that he personally leads.

“I got the impression that Prime Minister Lee’s rebuke seemed to be especially directed at Minister Yun Byung-se,” said a government official who requested anonymity.

Yun is generally seen to be favored by President Park Geun-hye, particularly with diplomacy highlighted as a priority among the administration’s policies.

Lee, who has been in his post for a little more than a month, has been gradually tightening his grip over the cabinet. “I will suggest the president dismiss any minister who can’t do their job well,” he said just one week after taking office, emphasizing his intention to fully exercise the powers granted to prime ministers in the country’s Constitution.

On March 12, Lee went on to declare an all-out war against corruption.

His attendance check last week appears to be part of his attempts to exercise control, deviating from the quieter roles of past prime ministers, many of whom have merely served as proxies for the president or held the title ceremonially.

As word of Lee’s remarks spread among government officials, the Ministry of Foreign Affairs was quick to defend its leader.

“Minister Yun had a meeting with former Egyptian Foreign Minister Nabil Fahmy on that day at 3 p.m. on the 17th floor of the government complex,” a Foreign Ministry official said. “The minister met with him in person because [Fahmy] is an influential politician who assisted us following the death of our citizens during the Sinai insurgency [in 2014].