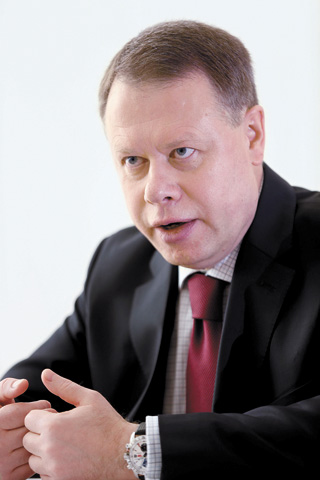 Vasyl Marmazov, the ambassador of Ukraine to Seoul, called 2014 “definitely the most difficult year since 1945 for Ukraine as well as for Europe in general” in an interview following the first anniversary of his country’s regime change.

“Many milestone events for the people of Ukraine have taken place in Ukraine since the beginning of 2014,” Marmazov told the JoongAng Sunday on March 18 in an interview at the Embassy of Ukraine in central Seoul, following an exchange of written questions and answers.

Last month marked the first anniversary of the ousting of president Viktor Yanukovych in February 2014 following massive street protests in Kiev, also referred to as the Maidan Revolution of Dignity. The popular uprising began in late November 2013 after the Yanukovych government refused to sign an Association Agreement with the European Union.

“We didn’t expect that the Russian Federation, the neighboring country and one of our biggest trade partners, would encroach on our lives, territory, freedom and independence,” the Ukrainian envoy continued.

“The annexation of Crimea one year ago by neighboring Russia was a vile act carried out contrary to international law,” Marmazov said. “Ukraine will never give up its sovereign rights to Crimea.”

He added, “But the whole country, young and old, has risen and united to defend the homeland. We have not only withstood, but also found a decent response to all these challenges.”

This included the election of a new president last May, a reshuffling of parliament, governmental reform and the signing of the Association Agreement with the EU. The landmark agreement to strengthen ties between Kiev and Brussels was ratified simultaneously by both the EU and Ukrainian parliaments on Sept. 16.

“Ukraine urges Russia to respond to calls of the international community and stop all human rights violations, as well as to allow access of international observers to monitor the situation on the ground,” said Marmazov.

He continued, “One day, I am confident Ukraine will regain control over the peninsula.”

Marmazov also said that the international media inaccurately describes the situation in Ukraine as a civil war.

“There is no civil war in Ukraine, according to the definition of ‘civil war’ as a war between citizens of the same country. We defend our territory from Russian invasion and Russia-backed militants in the eastern part of Ukraine.”

The ambassador also emphasized that he looks forward to boosting bilateral relations between Ukraine and Korea both diplomatically and economically.

“We appreciate the support of the Republic of Korea in preserving the sovereignty and territorial integrity of Ukraine both on the bilateral level as well as in the institutions of the United Nations organization,” he said.

Marmazov said his country also is grateful that the Korean government provided Ukraine with $500,000 in humanitarian assistance through the UN and the International Committee of the Red Cross last September.

He said he would like to see President Park Geun-hye visit Ukraine to bolster trade and economic cooperation, including attracting Korean investments and application of Korean technologies to Ukraine’s economy. He also urged further liberalization of the visa regime between the two countries.