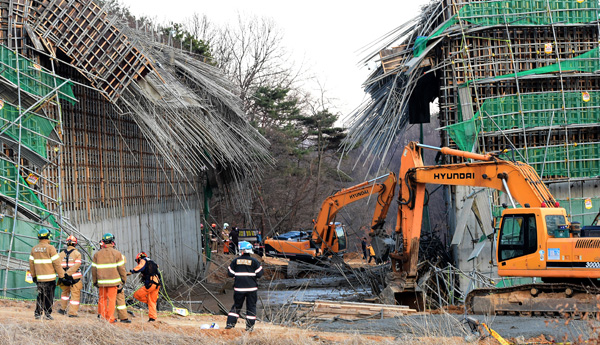 Firefighters look for construction workers buried beneath a collapsed scaffolding on Wednesday in Yongin, Gyeonggi. The accident killed a 67-year-old employee and injured eight others. Police are currently investigating to determine the cause of the accident and raided four companies related to the construction. [NEWSIS]

Authorities looking into a fatal collapse this week at a construction site in Yongin, Gyeonggi, dispatched investigators to the scene Thursday to determine the cause of the accident.

On Wednesday, a scaffolding 27 meters (30 yards) long, which had been set up for workers to construct an area road, abruptly collapsed, killing a 67-year-old construction worker and injuring eight others who were forming concrete slabs.

One of the survivors was seriously injured but is currently recovering in an intensive care unit.

There were 17 people atop the scaffolding when it fell, though eight managed to get out of the rubble.

The investigators from the Yongin Dongbu Police Precinct are currently inspecting the collapse to find out whether the workers properly followed the blueprint design.

The police have ruled out the possibility that the employees poured an excessive amount of concrete mix, as the design was meant to stand 1,500 cubic meters and the accident occurred when only 1,000 cubic meters (2,300 kilograms) of mix had been poured.

In construction, the concrete volume is typically measured in cubic meters.

“First of all, it means something was wrong because the support could not stand the slab,” said Sim Dong-su, chief of the crime investigation department. “We are looking into every possibility such as insufficient number or strengths of supports or wrong design of them.”

On Thursday, the police also acquired search and seizure warrants for four companies related to the construction, the Korea Land and Housing Corporation, Lotte Engineering and two of its subcontractors, and raided their offices.

“We have received documents related to the construction on the day of the accident, but we raided their offices because the data wasn’t sufficient,” a police officer said. “We are planning to summon employees after analyzing the confiscated documents.”

The police additionally questioned construction workers at the scene at the time of the accident.

While investigators are looking into the scaffolding, experts say it is more likely to be a common accident due to human error, not a problem of design.

“There could be many reasons for scaffolding collapse, but it is mostly because construction workers did not properly establish the system support,” said a source who works as a professional engineer.

“It is the most frequent type of accident that usually occurs because construction workers did not set up the system support firmly enough so that they could shorten the period of construction.”