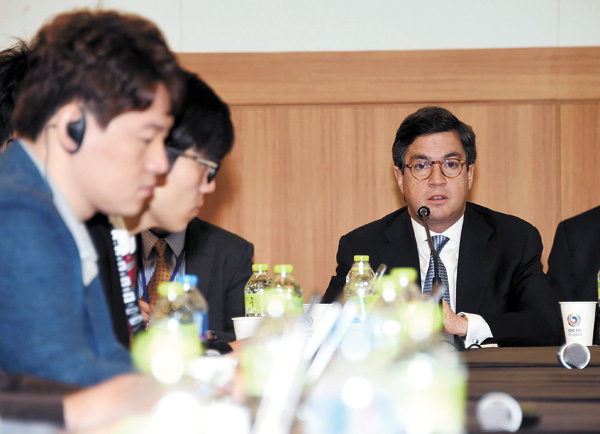 Luis Alberto Moreno, president of Inter-American Development Bank, speaks at a press meeting at Bexco, Busan, on Friday. Provided by Ministry of Strategy and Finance

President of Inter-American Development Bank (IDB) Luis Alberto Moreno said the members of the bank, which include many Latin American countries and the United States, will welcome and cooperate with the newly launched Asia Infrastructure Investment Bank (AIIB) led by Beijing.

“We are happy to cooperate with the AIIB and any other development institutions,” said Moreno during a press meeting at the Busan Exhibition and Convention Center.

“As far as I understand, the AIIB is for investment in infrastructure in Asia,” he said. “The AIIB is working in the same way we are working. We are also close to other institutions such as the Asian Development Bank.”

The Asian Development Bank, led by Japan, is another regional development bank.

His remarks came on Friday, a day after South Korea announced its decision to join the Beijing-backed AIIB, a regional finance institution that focuses on funding infrastructure construction in underprivileged regions in Asia. By joining the AIIB, South Korea will follow other major U.S. allies in Europe. South Korea decided to join despite fears of straining diplomatic ties with Washington.

When asked about concerns over political unrest in Latin America which could affect business interests in the region, Moreno advised Korean businessmen not to take news articles too seriously.

“Latin America also has a demographic bonus,” he said. “We have, in the past decade, seen a significant increase in the size of the middle class.”

Moreno had visited Korea as a student in the 1970s. At that time, he was attending university in the United States and developing his own business importing taekwondo uniforms.

“At the time Korea was very different from now,” he said. “Since your country became a member of the IDB in 1995 , your country has shared many lessons on development with other members. We still have much to learn from South Korea.”