Seoul’s clout in AIIB is still being negotiated

Seoul’s clout in AIIB is still being negotiated 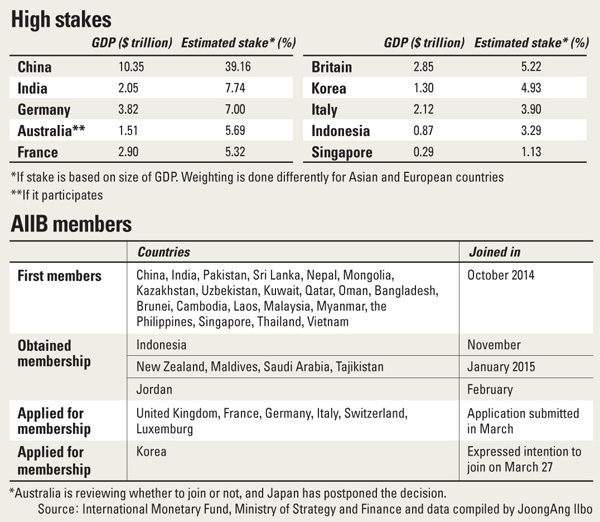 After Korea finally decided to join the Beijing-backed Asia Infrastructure Investment Bank (AIIB), the question now is how many shares Seoul will get, which will dictate the strength of its influence.

South Korean authorities are negotiating to obtain as many shares as they can, said Finance Ministry official Choe Hee-nam at a press conference at Bexco in Busan on Friday. Korea ranks third among Asian members of the bank in terms of the size of its gross domestic product.

“The matter of shares is being discussed among member countries,” said Choe.

“It is expected that the decision on the amount of shares [given to each member] will be based not only on the size of its economy but also on additional factors,” he said. “Although Korea ranks the third in GDP among regional member countries, it is not at all certain that GDP is the only standard.”

Once the amount of shares is decided for each country, the members will contribute capital proportionally based on their shares, Choe said.

According to the latest data by the International Monetary Fund, Korea’s $1.44 trillion GDP ranks third among the AIIB’s member countries in Asia. The first place is held by China, with a $10.35 trillion GDP, followed by India’s $2.04 trillion.

Asia’s second-largest economy Japan, with a GDP of $4.76 trillion, has not decided yet whether to join the bank.

Under the rules of the AIIB, non-Asian member countries are restricted to 25 percent of voting rights in total; the remaining 75 percent goes to Asian countries.

If the calculation is done by comparing the member’s GDP with the total GDP of all AIIB members in Asia, Korea would get 4.93 percent of shares in the bank, according to data compiled by JoongAng Ilbo.

China intends to be the largest shareholder. It contributed $50 billion for the bank’s initial capital, which it aims to raise to $100 billion with other countries’ contributions.

Asked about concerns that Korea’s late decision to join could lead to it getting a smaller number of shares, and a smaller role in the bank, Choe dismissed the possibility.

“All things will be decided once negotiations for the foundation are completed,” he said.

Jee Man-soo, a research fellow at Korea Institute of Finance, said it doesn’t seem likely that China would penalize South Korea for its late decision. But at the same time, it’s also unlikely that Korea will have a leading role considering its GDP size.

“If Korea receives fewer shares because its decision was somewhat late, it would be unacceptable for Seoul and for the other countries who decided late in the process,” said Jee. “However, while GDP seems to be the best standard for deciding shareholdings, chances are slim that Korea could rank second in shareholdings.”

According to a Finance Ministry analysis, the ratio of Korea’s shares in other international organizations is in the low single digits. In the IMF, Korea holds only 1.41 percent of the shares, while in the World Bank it has 1.58 percent. At the Asian Development Bank (ADB), a regional development bank led by Japan, Korea’s shares amount to 5.06 percent.

If approved by other members, the AIIB will become the first international organization that Korea joins as a founding member.

In October 2014, a total of 21 Asian countries signed a memorandum of understanding to launch the AIIB and become prospective founding members. Following the move, six more countries, including Indonesia and New Zealand, applied for the membership and got approval as of February.

South Korea hesitated to join the institution because its major ally, the United States, expressed concerns over the possibility of China using the bank for political purposes.

But this month, other U.S. allies in Europe applied for membership including Britain, another major U.S. ally.

Beijing announced that it would relinquish a veto power on decisions, a move to attract more European countries to the bank, the Wall Street Journal reported on Wednesday.

Korea’s participation in the bank is expected to help the local construction business who could get business in the projects financed by the bank.

“If the bank is officially inaugurated, it would lead to an increase in participation of our companies in building large-scale infrastructure in Asia,” the Finance Ministry’s Choe said. “According to local media in China, the Chinese government is planning to spend $1.6 trillion on this bank, which accounts for 2 percent of the world’s total GDP,” So Jae-yong, an analyst at Hana Daetwoo Securities, told the JoongAng Ilbo, “Starting with investments in infrastructure such as railways and harbor, it will expand to other sectors like the environment and medicine.”

Responses to Seoul’s joining the bank varied in Washington, Tokyo and Beijing.

“I’m not going to react or comment on their decision,” said Jeff Rathke, director of the U.S. Department of State, at a daily press briefing on Thursday. “I’d say in general, we’ve seen a number of countries make decisions to join the bank. That is their decision.

“We certainly hope that, as we stress the importance of international standards and transparency, that they will also be voices for those same values,” he said.

“The Japanese government is in a cautious attitude [in joining the bank] expressing concerns over whether strict operation of the bank is possible or not,” a Kyodo News report said on Friday in its Korean-language dispatch. “However, while Japan, China and Korea are moving forward in normalizing relations, Korea announced its participation, raising a possibility of Japan’s isolation in Asia.”

China’s state-controlled Xinhua News Agency welcomed the news, saying on Friday, “Joining the AIIB will be of great economic benefit to South Korea as its companies and banks will be allowed to participate in large-scale infrastructure development projects in Asia as a founding member of the bank.”