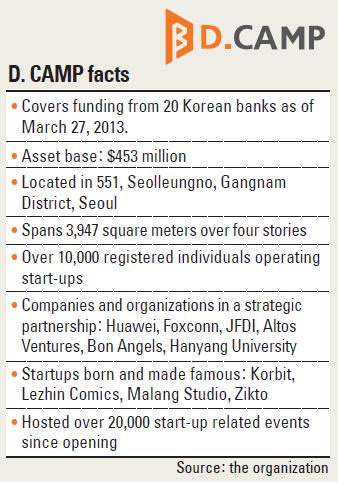 Celebrating its second anniversary, D.CAMP, Korea’s first start-up incubator, vowed on Friday to step up support for local start-up environment and came up with a long-term vision to represent Asia.

The non-profit organization, which is often compared to YCombinator in Mountain View, California, has been actively pursuing that role, organically connecting venture capitalists, burgeoning entrepreneurs and mentors.

Spurred by its conception and recent activities, similar incubators and accelerators have sprung up in Korea on the back of hefty funding from large companies and angel investors.

Whereas incubators physically locate their businesses in one central work space with other start-up companies, the time for a business in the space at an accelerator is typically limited to a several-month period at most. It is intended to jump-start the fledgling business within a limited time frame.

“To further vitalize the start-up community, we should be able to innovate existing corporate culture,” said Kim Kwang-hyon, the executive director of the organization. “D.CAMP will take the lead in spreading the entrepreneurial spirit that particularly focuses on creativity.”

Kim, a former IT reporter at The Korea Economic Daily, was inaugurated as the new executive director of the organization at the beginning of the year to replace his predecessor, Lee Naree. Lee, a former JoongAng Ilbo editorialist, now heads Beyond Division at Cheil Worldwide, the advertising arm of Samsung.

According to data from D.CAMP, over 10,000 individuals have registered their profiles as start-up operators with the organization and 31,500 individuals have taken the challenge to open up their own business at its free offices over the past two years.

In the same period, some 2,000 start-up-related events and conferences have taken place with almost 70,000 participants.

Up-and-coming start-ups such as Korbit, Lezhin Comics, Malang Studio and Zikto were born and fostered in there.

D. CAMP was established by some 20 banks that are members of the Banks Foundation for Young Entrepreneurs - including Woori, KB Kookmin and Shinhan Banks - on a combined investment of 500 billion won ($453 million).

The organization has also been active in forging strategic partnerships with companies, venture capitalists and organizations in and outside the country.

Kim vowed earlier to take advantage of the ties to aid start-ups that aim to enter China.

Korea’s three mobile carriers - SK Telecom, KT and LG U+ - as well as portal sites Naver and Daum run their own start-up accelerators. Google’s Korean operation is set to open a start-up incubator campus in April, just a few blocks away from D.CAMP.