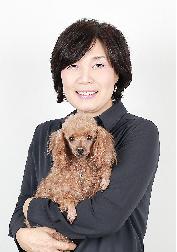 For 16 years, Jo Hee-kyung has worked as an animal rights activist, and in that time she’s had to endure a slew of critical comments and sarcastic remarks concerning the movement.

“After you finish your protest against eating dog, do you go eat samgyeopsal [pork belly]?” some have asked.

She got involved nearly two decades ago, when she volunteered to help abused animals. And since then, she said, she’s never been able to forget the pain in their eyes.

Dogs were used as experimental subjects in an underground laboratory in a hospital. Piglets were fed their mother’s milk in a tight, narrow cage. Hens laid eggs in cages smaller than an A4-size piece of paper.

That solidified her conviction to work as an animal rights activist, said Jo, who currently heads the Korean Animal Welfare Association.

“I will live for you from now on,” she told herself.

Jo recently published her first book about her journey helping animals, entitled “In Sympathy with Common Sense,” which she said she wrote to share her ideas on the animal protection movement in Korea for next-generation activists.

But despite her busy schedule, she sat down for an interview with the JoongAng Ilbo at her office in Hangdang-dong, eastern Seoul. When a reporter opened the door of her office, a group of her dogs inside started barking wildly.

“Some people are critical that we oppose eating dog, yet it’s ironically acceptable to eat chicken and beer,” Jo said, laughing. “Protesting dog consumption is not just an argument based on the traditional concept of dogs being man’s best friend.

“It’s because all death is painful, particularly for dogs, as they endure more cruelty and brutality when they’re slaughtered than other animals.”

In general, dogs can’t live together in one cage, as they are naturally driven to fight in closed spaces, she added.

When asked her thoughts on the controversy surrounding a U.S.-based animal rights group, whose rescue in January of dozens of dogs from a Korean meat farm raised questions about the group’s motivations - a former Korean animal rights worker suggested that the organization’s intention was to use the rescue to amass funding - Jo responded: “I agree with their purpose. But when those kinds of foreign activists do similar rescues, we often face criticism in the country, with people saying, ‘They don’t know anything about Korean culture.’

“It’s regrettable they didn’t discuss the matter with us in advance,” she said. “I often ask [Koreans] not to immediately criticize those moves and think about why people worldwide are against dog-eating culture.”

Jo also touched upon the dire living conditions other animals must bear. “I came upon a hog farm in 2006, where piglets fitted in a tight cage were desperately suckling their mother’s milk,” she said. “It was truly violent.

“Under those kinds of living conditions, they are likely to be infected with foot-and-mouth disease and culled,” Jo continued. “If farmers improve those conditions just a little bit, it would already reduce the cost for slaughtering infected animals.”

She added that the most frequent questions she was asked as an animal rights activist was, “Do you put animals before human beings?”

“Animal protection is given the least attention and consideration when it comes to the animals we actually use [for food],” Jo said. “You go to zoos and eat all kinds of meat at a cheap price, but these acts all worsen animal abuse. I say, to start, why not eat an egg from a package with a label that states the animal’s welfare was guaranteed?”