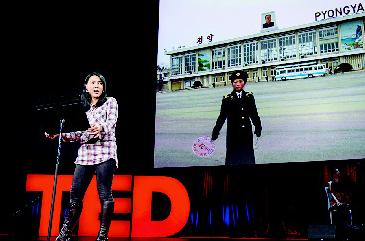 Suki Kim speaks on March 18 to an audience at TED 2015, held in Vancouver, at the invitation of the event’s organizers. Kim is the author of “Without You, There Is No Us: My Time With the Sons of North Korea’s Elite.” Provided by TED

VANCOUVER - In the eyes of North Korean students, Steve Jobs and Mark Zuckerberg are total strangers, and there is no way they would even recognize Apple or Facebook, according to Suki Kim, the author of “Without You, There Is No Us: My Time With the Sons of North Korea’s Elite.”

The book has been published in South Korea, the United States and Spain and is set for print in the United Kingdom next month.

Kim spoke on March 18 to an audience at TED 2015, held in Vancouver, at the invitation of the event’s organizers.

In her address, as in her book, she chronicled her six months working as an English teacher in 2011 for the North Korean elite attending Pyongyang University of Science and Technology.

Unlike other speakers at the TED Vancouver event, Kim made minimal use of presentation devices. Instead, most of her speech focused on explaining what the life of a North Korean college student is like.

Many of her students at the all-male academy were computer engineering majors - though none of them had ever heard of Apple or Facebook, she said.

The only scientific term they knew well was Kwangmyongsong-1, the name of the first satellite Pyongyang developed and claimed to have successfully launched in August 1998. However, the effort was widely considered a failure by observers outside North Korea.

She also described the dismal situation that is the Internet search system controlled by the North Korean authorities. North Korean students are unaware that the Internet they use barely stands at an Intranet level. When Kim attempted to explain to her students the term www, the acronym for the World Wide Web, she was ultimately held back by authorities.

The “not-do-do list” that North Korea’s Labor Party sent to American teachers included never wearing jeans - considered symbolic of the United States - and never talking to anyone outside the school.

Additionally, educators were only allowed to listen to music via Apple iPods, as authorities feared Kim and the others could leak CDs containing music from outside the country.

It was weird to use an iPod in a country that doesn’t even have knowledge about Apple, Kim noted.

But what was hardest for her students, she added, was writing: Most had difficulty expressing their own opinion even in one simple sentence.

But in the end, they would ask questions and understood why they should ask.

Yet, they would then ultimately realize that they couldn’t ask questions, as the act of asking goes against North Korea’s Juche ideology.