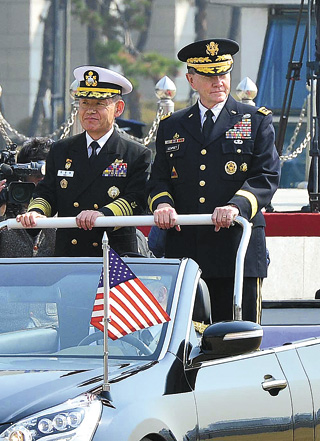 The military chiefs of South Korea and the United States met Friday in Seoul to talk about a range of defense issues, though Korea’s Joint Chiefs of Staff (JCS) said the hot potato issue of the Terminal High Altitude Area Defense system, or Thaad, was not discussed.

Gen. Martin Dempsey, the Chairman of the American JCS, paid a visit to the National Cemetery Friday and then to the Korean JCS in Yongsan, central Seoul, where he had a discussion with his Korean counterpart Adm. Choi Yoon-hee and other JCS members. Dempsey was on the second day of a three-day visit to South Korea

During the talks, the two top military officials discussed the transfer of wartime operation control, measures to strengthen the combined defense posture of the two countries and also the future of the alliance.

“In today’s meeting, the members assessed the results of the military alliance between the two countries under the outgoing U.S. JCS Chairman Gen. Dempsey and discussed overall issues concerning how to further improve the Korean-U.S. alliance,” said an official of the JCS.

“Main topics were how to prepare for wartime operation control and measures for the practical improvement of the joint defense posture, and the two chairmen also reaffirmed the strength of the 62-year ROK-U.S. alliance, which is the linchpin of peace of security in the North East Asia.”

There was anticipation that talks would include Korea’s deployment of the Thaad system, which is opposed by China and Russia. The JCS emphasized that Thaad was not on the agenda.

“Issues that should be reviewed by the government such as the Thaad system placement in Korea were not discussed,” added the official.

Both countries maintain the position that they have never officially discussed the issue and that the U.S. has never formally asked South Korea to allow a Thaad battery on its soil.

But Adm. Choi and Gen. Dempsey did agree that South Korea needs to be protected against North Korean nuclear missiles, and they discussed integrated air and missile defense (IAMD), a multinational air defense system including Seoul, Washington and Tokyo that Dempsey previously said was already making progress in the region.

Analysts said the United States chose to focus on the two nation’s cooperation rather than pressing the Thaad issue.

“Washington carefully approaches sensitive issues because it knows it is difficult to maintain the ROK-U.S. relationship when anti-U.S. sentiment is triggered,” said Choi Gang, deputy director of the Asan Institute for Policy Studies. “It is expected that Dempsey chose not to mention Thaad because it would only raise a huge controversy in Korea.”

The Thaad system might finally be brought up when U.S. Secretary of Defense Ashton Carter visits Korea next month.

After the discussion, which lasted more than three hours, Dempsey paid a call on Korean Defense Minister Han Min-koo.