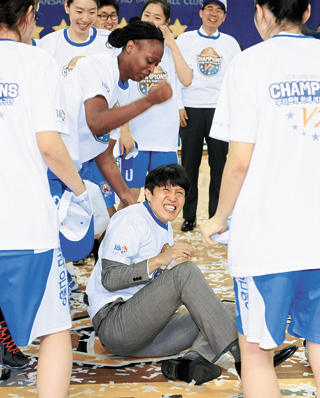 Coach Wi Sung-woo, center, is trampled on by players after the WKBL championship on Friday. [NEWSIS]

All players like to win and celebrate success in their own style, but Chuncheon Woori Bank Hansae’s victory ceremony is somewhat unique: They trample all over their coach.

This moment happened last Friday. After beating Cheongju KB Stars 64-55, Hansae clinched the Women’s Korean Basketball League title for the third consecutive season as it took the best-of-five championship series with three wins and one loss.

Once the players confirmed they had the championship title, they suddenly rushed to coach Wi Sung-woo, 44, put him in the center of the court and stamped on him.

Although the coach shouted and begged for leniency, he was smiling.

Hansae has been performing this ceremony since the 2012-13 season and it has become a special tradition for the club. Although there is criticism that it looks violent, Hansae players say they get rid of their stress with this ceremony.

“After tossing the coach, we just step on him out of instinct,” said guard Park Hye-jin who was named the championship series MVP. “Since our coach trains us in a very tough way there is no other place to get rid of our stress.”

Wi is a coach who is known for his harsh and rigorous training during the season. The Hansae players have often said that the coach is “too mean,” but also acknowledge that his training system puts the team ahead.

This season, Hansae was predicted to have a tough time in the regular season because they did not have much time during the offseason to prepare team plays and tactics. From August, Wi, assistant coach Chun Joo-weon and four players had to join the women’s national team for the Incheon Asian Games, in which Korea eventually won the gold medal.

However, despite these worries, Hansae showed no weakness. The team made the WKBL record after a 16-game winning streak from the season opener and won the regular season title with 28 wins and seven losses.