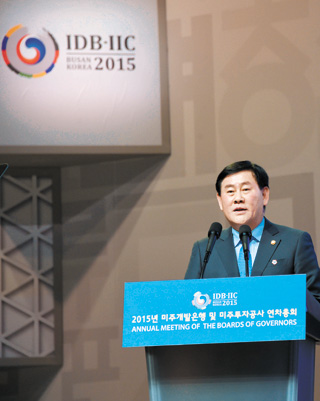 South Korea will provide $1.1 billion to the Inter-American Development Bank (IDB) to fund projects in Latin American and Caribbean countries, as part of efforts to develop economic ties with these resource-rich nations, Finance Minister Choi Kyung-hwan said on Sunday.

After the IDB members’ annual general meeting at the Busan Exhibition & Convention center (Bexco), which Choi presided over this year, the minister said he hoped for “a boom in business in Central and South American countries.”

“At this year’s general meeting, we launched a $1.1 billion development and cooperation plan between Korea and South-Central America, the sharing of our development experiences and ideas on infrastructure construction,” said Choi at a briefing after the closed-door meeting.

“We will see a new era in economic relations between the two regions through sharing South Korea’s IT technology and manufacturing skills and the South and Central American countries’ rich energy and mineral resources.”

Under the development plan, $500 million will come from the Economic Development Cooperation Fund, a state budget allocated for assisting developing countries’ economic projects as part of the official development assistance (ODA) program.

The remaining $500 million will be provided by several state-run financial institutions such as the Export-Import Bank of Korea, the Finance Ministry said.

Since the fund launched in 1987, South Korea has provided a total of 10.15 trillion won ($9 billion) to 311 worldwide development projects run by various international organizations and development banks, according to government statistics.

The remaining $100 million will be invested in infrastructure construction projects across the continent, in the form of a low-interest loan to some developing countries there.

Additionally, the IDB and the South Korean government will offer support to launch electronic government (e-government) systems and intelligent transportation services, according to the Finance Ministry.

“The $1.1 billion plan is in line with our ODA project, and there will be no monetary burden,” Choi said.

When asked about Korea’s small share in the IDB, Choi admitted it is difficult for the nation to take a leading role in many projects led by the bank in its current position.

“The current level of shareholding, 0.003 percent, gives difficulties for Korea to raise its voice at the bank’s meeting,” Choi said.

On the sidelines of the general meeting, the finance minister also had summits with his South and Central American counterparts.

At the bilateral summit with Nicaragua minister Ivan Adolfo Acosta Montalvan, for instance, Choi agreed to offer $66.3 million in loans to the country for the construction of a sewage system, the Korean Finance Ministry said.

President Park Geun-hye also attended the opening ceremony of the meeting on Saturday at Bexco and pointed out that the two regions could develop relations in various ways, not just by exchanging Korea’s high-end skills and the continent’s natural resources.