Volcker sees no reason to fret about deflation

Volcker sees no reason to fret about deflation 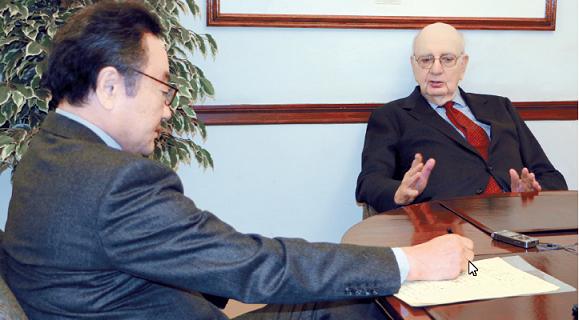 IGE Chairman and JoongAng Ilbo Adviser SaKong Il talks with Paul Volcker, former chairman of the U.S. Federal Reserve, in his office at Rockefeller Center in Manhattan. By Ahn Jeong-gyu

In a world deeply concerned about deflation, there is no problem with zero inflation. So says Paul Volcker, former chairman of the U.S. Federal Reserve.

In a conversation with SaKong Il, chairman of Institute of Global Economics and adviser to the JoongAng Ilbo, which took place in Volcker’s office at Rockefeller Center in Manhattan, the 88-year-old veteran economist widely known as “inflation fighter” emphasized his conviction that there is no need to worry about deflation in the United States at this time.

Volcker has been an honorary chairman of the Institute of Global Economics since it was founded. SaKong is a member of Volcker Alliance, a nonprofit organization established in 2013.

SaKong: I think the Korean audience, policymakers in particular, is very interested in knowing what you are doing nowadays.

Volcker: I established the Volcker Alliance in 2013. As a matter of fact, governments are losing trust not only in the United States but also in nearly all countries. There is a discernible lack of trust in government, not enough confidence in government. And there are a lot of reasons ideological or otherwise. I believe not enough attention has been paid to effective public administration and government administration. The slogan that I use all the time is a mantra that Thomas Edison, the great American inventor a hundred years ago, said: Vision without execution is hallucination. We are specializing not in the vision, but in execution because we think there s too much hallucination.

SaKong: You became Fed chairman in 1979 and were there for eight years. Since policymaking circumstances have changed, what is your assessment of how they are doing? If you were there, would you have done the same thing?

Volcker: It s a very unconventional time, and it requires unconventional policies. But I am concerned about central banks in general making a fetish over this 2 percent inflation. I don t know why they want 2 percent inflation. I am going to have a great grandchild shortly. If we have 2 percent inflation every year, by the time he grows up, prices will be four times what they are now. It doesn t make sense having prices double every thirty years or so. But that s the question for the central banks now. The first responsibility of a central bank is reasonable price stability. You don t have to measure down to the last decimal point. The statistics aren t that good anyway. But we are in a happy situation now where expectations on inflation are very low. They remain very low during all this very exceptional policy. I think that s very good. But we don t want to see that conviction weakened, so you should worry about the guiding policy. Over time, that s the best they can do in terms of stable income, rising employment and rising growth. You can t have a tradeoff between employment and stability. Or you ll end up with neither one. But the Federal Reserve also has to worry about the stability of the financial system. That s an inherent responsibility of any central bank. So I think they understand that now, but that s part of the reform that s necessary for financial regulation.

SaKong: I’ve seen your remark here and there regarding the term inflation targeting. You say control inflation, not target it.

SaKong: But many people are so concerned about experiencing what the Japanese suffered for almost two decades that they became too sensitive.

Volcker: The Japanese had an extremely difficult financial collapse in the late 1990s. Stock market and real estate prices went down far more than in the United States. It took a long time to deal with what they are still dealing with. Japanese real income per worker is not much different than what it is in the United States. All these criticisms of Japan forget that their labor force is declining. Their population is declining. Our population is going up. So our labor force trend is up 0.1 percentage point; theirs is 0.1 percentage point down. We shouldn t be equal. We should be growing 2 percent per capita. They say Japanese psychology is sluggish and not rigorous. I understand all that. But that s inherent in a declining population. What s happening in Korea?

SaKong: Korea is aging very fast and our fertility rate is the lowest in the OECD at 1.19. We are catching up with Japan quite fast. Pretty soon we are going to have a similar problem like Japan. How about deflationary concerns in Europe?

Volcker: Europe has a big problem. Again, I am not worried about overall inflation in Europe. But they have this tension and a very serious problem in Greece, a serious problem in Spain and in other countries. In other words, the North is doing okay and the South is not. And we will see in the next few weeks or a month or two, whether the Greek thing can be stabilized a bit.

SaKong: How do you assess the Volcker Rule incorporated into the Dodd-Frank Act? Are you satisfied with the way it is framed?

Volcker: I think the regulators enacted the rule in a timely manner. A handful of big banks worry about it. But they can t argue with the basic philosophy. Here are necessary financial institutions, big banks, providing services that are essential. They should be performing necessary services.

SaKong: Is the Volcker Rule pretty much watered down from the original version. Or is that the way you wanted it?

Volcker: Well, it s a very detailed rule. One thing we changed during the last negotiations in Congress, with all kinds of things going on, required 60 votes. The rule says you can t do proprietary trading, but that extended to hedge funds and equity funds because they could become vehicles for proprietary trading. So banks are prohibited from sponsoring those institutions. At the last minute, there was an exception made up to a certain amount, but the exception was not big enough to satisfy big banks and big enough to satisfy small banks. That s why it got passed. But there re still efforts to expand that. You can t do hedge funds and equity funds beyond a certain level. So some people say that s why the lobbyists are complaining every day.

SaKong: Already there are reports that the Volcker Rule has been effective in separating banks from hedge funds.

Volcker: There s no question about it. You can measure by the number of traders. And investment banks go off with hedge funds and are eagerly trying to make some money with other guys. None of them I think has proprietary divisions anymore. The question is how much they can do for their customer trading. That s why the rule is complicated, to make sure to have all kinds of things, but I am reasonably satisfied. The Rule is strong enough.

SaKong: With the Volcker Rule in place, I suppose it will help avoiding future crises, if not prevent them.

Volcker: One other potential problem now is the U.S. interest rates are low, practically zero. So, some people borrow in dollars and they lend it to Korea, Thailand, Indonesia, Vietnam, India, or Brazil, because it s so cheap to get the money here. So, they can lend it at a few percent to those countries. The amount of dollar lending to developing countries is going up. Now they have to repay the dollars, and their currency is depreciating, and everybody wants the dollars back. And it can be quite serious. Is corruption a serious problem in Korea?

SaKong: Corruption is a problem everywhere nowadays. But in relative terms, corruption is not much of a problem in Korea. We now have very strong opposition parties, Internet and everything. Society has become more transparent.

Volcker: What do you think about China? Do they talk about it a lot?

SaKong: Well, they are doing a lot, because corruption is not just a sociopolitical problem but an economic problem.

SaKong: But I think the Chinese corruption problem has a lot to do with their political system as well. The government keeps so much monopoly and licensing power, so corruption comes with them, unless you liberalize them. So I think this liberalization should go along with this corruption campaign. Otherwise, they can t solve the corruption problem in a fundamental way. So their big problem is how to harmonize the role of state and market capitalism.

Volcker: My Chinese hero has always been Zhu Rongji. He felt quite strongly about this. I remember, because I was involved, at an international economists club he talked very strongly about improving corruption in China, he would say, Tell no lies. I am not sure if that spirit still exists in China. It takes very strong leadership to do it.