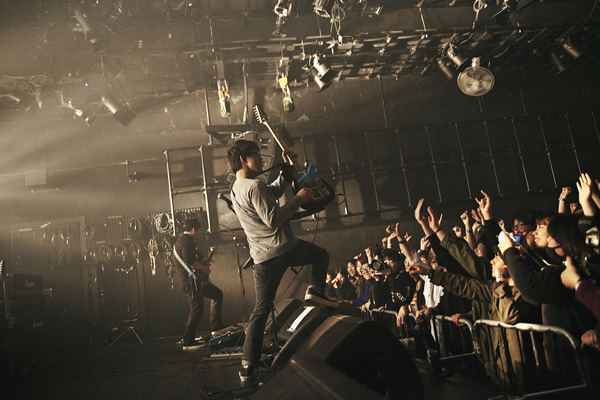 Indie band Guckkasten performs during the first Hongdae Live Club Day, which has returned four years on, in February. Music fans can buy one ticket to enter 10 or so clubs and enjoy performances from up to 40 indie bands. Provided by Company F

The local indie music scene is celebrating its 20th anniversary this year.

Underground music has, of course, been around for many years.

But industry insiders date the beginning of the Korean scene back to 1995, when a couple of musicians got together in the Hongik University area, western Seoul, and staged a tribute concert to Kurt Cobain, the late frontman of U.S. rock band Nirvana.

Music critic Bae Soon-tak wrote in his book “Running Youth” that the country’s indie music scene started around the same time as Club Drug (also known as DGBG) opened in Hongdae, as the area surrounding Hongik University is known as.

In his book chronicling the 1990s music scene, Bae describes the club, which launched in July 1994, as “a womb that has grown numerous indie musicians.”

A year after the tribute concert, Crying Nut and Yellow Kitchen, two prominent indie bands from the time, released the joint album “Our Nation” - considered the first indie record of its kind to be released in Korea.

To commemorate two decades of the underground, numerous events and concerts are being planned for people who have had enough of K-pop.

Many indie musicians are also releasing albums to coincide with the celebrations.

Of all the events, the most notable is the resurgence of Hongdae Live Club Day.

Organized by 10 clubs located in the hip neighborhood, the event enables people to hop around 10 venues on the last Friday of each month and enjoy the performances of up to 40 indie acts.

The last Live Club Day event took place more than four years ago in January 2011 because of internal issues among the participating clubs, but it recently relaunched in February this year.

The first Live Club Day event was successful, attracting 2,200 visitors, and the second was held on Friday with a stellar lineup of various indie musicians, from Jang Kiha and the Faces - probably the most well-known indie rock band in Korea - to Dickpunks, the semi-finalist of the fourth season of TV audition show “Super Star K.” 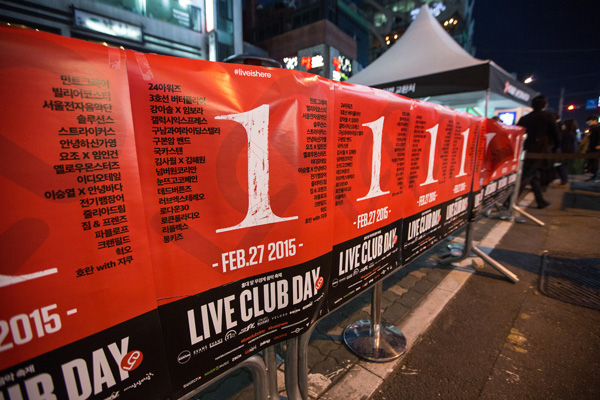 The third Live Club Day will be held on April 24. Tickets are available from Xindie Ticket Lounge (http://www.ticketlounge.co.kr/main/main.asp) or from participating clubs on the day of Live Club Day.

“We see [Hongdae] clubs as the root of the Korean indie music,” said Kim Se-hun, an official working for Company F, the organizer of the event.

“That’s the reason we began this event again. Its main purpose is promoting club culture so that people are able to pay more attention to indie music.”

Kim added that most of the involved clubs stage live music performances by indie artists every weekend.

The official Facebook page of Live Club Day lists more detailed information about the monthly event on www.facebook.com/liveclubday (Korean only).

Jang Kiha and the Faces, who were considered to bring about the indie music scene’s second heyday in 2008 with the hit “Cheap Coffee,” is holding a concert on April 11 at Muv Hall in Seogyo-dong, western Seoul, near Hongik University.

It is the rock band’s first in a series of concerts in which they will introduce domestic and international indie musicians of various genres to local music aficionados.

Jazz trio Yun Seok Chul Trio and folk duo Kim Sa-wol X Kim Hae-won will take to the stage along with Jang Kiha and the Faces.

Bugs Music, a local music web portal, produced a compilation album that has 20 songs by indie musicians who represent the nation’s underground scene.

Of the 20 songs, some were newly produced for the album.

Through the portal, the first and second batches of songs from the special album went online on March 12 and March 26.

The third lineup of songs will be available on April 9.

Top to above: A compilation album released by music portal Bugs Music chronicles the past and present of indie music; “My Happy Little Pill” is an album by indie act Stray; Indie musician Lee Han-chul’s newest album “Spring Days”.

When all the songs are released online, they will come out as a CD.

The album should be a solid starting point for those who have little knowledge about local indie music, because it has tracks by Crying Nut and Nobrain, the first generation of indie musicians here, to more recent acts such as rock band Sultan of the Disco and Yozo

The latter is often called the goddess of the indie scene.

“We hope this album will revive the indie music scene,” said Kwak Min-su, the head of the investment and distribution team at Neo Wiz Internet, Bugs Music’s operator.

Old and new indie musicians have also released albums one after another in recent months.

Lee Han-chul, who has been performing as part of Bulldog Mansion, has released his solo album “Spring Days” earlier this month.

With the album, which is accented with various genres, from folk - his main specialty - to jazz to country music, all the songs are easy to listen to.

Stray, a member of electronic pop band Goldmund, released his single “My Happy Little Pill” recently, and Cranfield, which earned the title rookie indie musician of last year in an event organized by the Korea Creative Content Agency, has rolled out the new digital single “Blue Picture,” too.