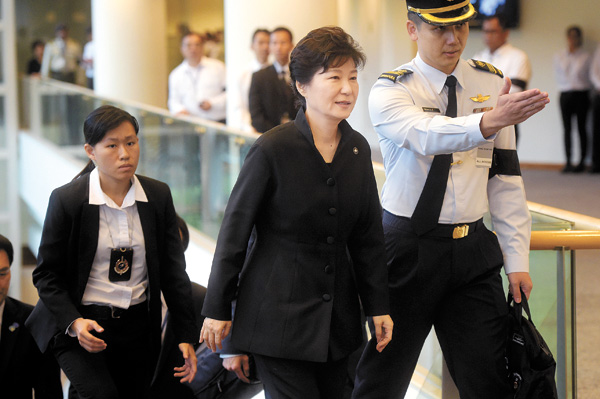 President Park Geun-hye, center, arrives on Sunday at the state funeral for the late Lee Kuan Yew at the University Cultural Center in Singapore. A million people visited tribute sites at community centers nationwide, and leaders and dignitaries from more than two dozen countries attended the funeral. [AP/NEWSIS]

Amid torrential rain, Lee’s body was taken from Singapore’s Parliament House on a gun carriage in an elaborate funeral procession stretching more than 15 kilometers (9 miles) that was witnessed by nearly half a million people.

Clad in a black pants suit, Park paid her condolences to the late statesman’s eldest son, incumbent Prime Minister Lee Hsien Loong, at the National University of Singapore’s Cultural Center, along with the other foreign dignitaries such as former U.S. President Bill Clinton.

Despite the short duration of the president’s daylong trip, some observers were intent on watching whether there would be any interaction between Park and Abe, who have yet to hold an official summit.

Experts pointed out that on occasions of funeral diplomacy, global leaders are often more casual in engaging in conversation.

The two East Asian leaders managed to avoid each other for most of the funeral, though they had several occasions to greet each other throughout the day. The ceremony, Park’s first overseas funeral since taking office, is especially significant because of her own personal relationship with Lee, dating back to when her father was president.

Lee’s passing marks the first time in 15 years that a Korean president has attended a foreign leader’s funeral.

In June 2000, then-President Kim Dae-jung visited Japan to attend the funeral of Prime Minister Keizo Obuchi, who died in office from a stroke.

Park arrived at the university’s cultural center at 12:50 p.m., ahead of the funeral procession.

She wrote in the funeral guest book in English.

“Lee Kuan Yew was a monumental leader of our time. His name will remain forever engraved in the pages of world history. The Korean people join all of Singapore in mourning his loss,” she wrote.

The president also greeted Canadian Governor General David Johnston and New Zealand Governor General Jerry Mateparae before taking her seat at the state funeral. At the ceremony, she chatted with Israeli President Reuven Rivlin and President Thein Sein, whom she was seated between. Abe was 10 seats away.

The Blue House official added that Park did not have a separate encounter with Abe before or during the funeral ceremony. After the funeral, she attended a reception hosted by Singaporean President Tony Tan for half an hour before departing for Seoul.

At the reception, Park and Abe finally exchanged words.

Abe thanked Park for “the successful launch of the recent trilateral foreign ministers meeting [with Korea, Japan and China] as the chairing country,” according to presidential spokesman Min Kyung-wook.

Park also relayed to Abe her hopes for a follow up to the measures agreed upon at the ministerial summit.