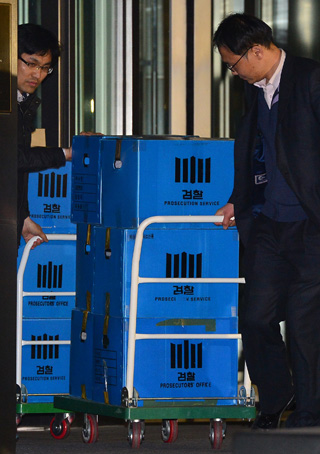 Investigators leave the headquarters of Dongkuk Steel in central Seoul on Sunday with seized material. [NEWSIS]

Prosecutors on Sunday finished a 17-hour raid on Dongkuk Steel to look into embezzlement and tax evasion allegations, the latest in a series of investigations on the nation’s conglomerates that follow a pledge by the newly appointed prime minister to wipe out corruption.

The country’s first privately run steelmaker is suspected to have stashed away more than 10 billion won ($9 million) through trade deals with its foreign branches by overstating the price of raw materials and avoiding taxes.

The company, which celebrated its 60th anniversary last year, has operations in various countries, including the United States and Japan.

Approximately 60 prosecutors and investigators from the Seoul Central District Prosecutors’ Office were assigned to the raid, which began Saturday morning and ended the following day at 2:40 a.m.

Other affiliates were also subject to the raid, likely indicating that the investigation on Dongkuk Steel might affect its subsidiaries.

About 10 establishments were busted in total.

The prosecution said Sunday that company employees in charge of finance and accounting will be summoned for questioning soon. Those in higher-ranking positions, including Chang, will be called afterward.

Authorities are looking into whether Chang used the stolen funds to indulge his love for gambling and referred to an instance in the early 1990s in which the 62-year-old was investigated by the National Tax Service (NTS) over suspicions he was illegally betting with company money.

For eight months in 2011, the company was investigated by the NTS following suspicions of offshore tax dodging, and a massive slush fund was believed to have been made by exaggerating trade deals made with its overseas branches in the United States and Southeast Asia.

The inspection, led by the state-backed tax organization, wrapped up with it imposing a 2 billion won fine on the company, and the prosecution did not launch a deeper investigation.

Dongkuk Steel merged with its affiliate, Union Steel, earlier this year in an effort to stabilize its financial structure and find new profit-making channels. The company vowed to expand its overseas sales network with the merger.

Last year, Dongkuk Steel had sales of 6.6 trillion won, down 9.3 percent from the year before.