Cha departure is a motivator against Kiwis

Cha departure is a motivator against Kiwis 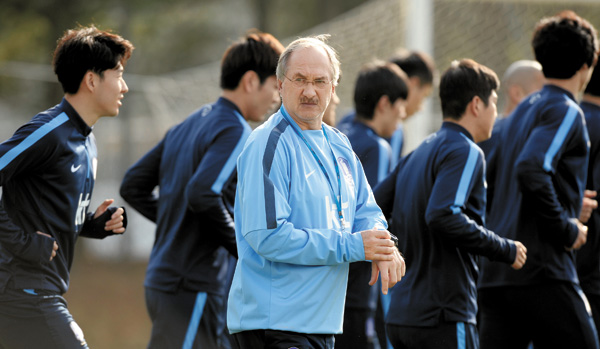 Korea, 56th in the FIFA rankings, managed only a 1-1 draw against Uzbekistan on Friday in Daejeon. But against New Zealand at Seoul World Cup Stadium tonight, players have some extra motivation to win for Cha, who will be wearing the Taegeuk Warriors uniform for the last time.

“Du-ri has been our energizer both inside and outside the team,” FC Augsburg forward Ji Dong-won told reporters at the National Football Center in Paju, Gyeonggi, on Monday. “So far, players haven’t prepared anything special. First, we think the best present for him is winning.”

Cha said creating a positive atmosphere around the national team before the regional qualifiers for the 2018 FIFA World Cup in Russia is critical and emphasized that tonight’s game is much more than his retirement match.

“I heard lot of stories after the Uzbekistan match didn’t go well,” said the 34-year-old after Sunday’s open training session. “For me, what’s important is the national team’s victory. I have no other interest beside that.”

Cha, who was member of the Korean national team that reached the semifinals in the 2002 World Cup, originally planned to retire after the Asian Cup in January, in which Korea finished second to host Australia.

However, coach Uli Stielike proposed a “retirement match.” Cha, who is with FC Seoul in the K-League Classic, will start against New Zealand and will be replaced before halftime, so he can receive a standing ovation from fans.

“I’m a really happy footballer,” Cha said. “I’m really proud the coach made a retirement match for me that everyone is thinking about.”

Stielike warned that New Zealand’s 134th world ranking is misleading, even though the head-to-head record favors Korea with five wins and one draw.

“New Zealand’s ranking is below us,” he said. “Before winning the Asian Cup, Australia was around 100th in the world ranking.”

For the match against New Zealand, Stielike hinted he will focus on offense. The 60-year-old German said Korea’s offense against Uzbekistan was good for the first 30 minutes, but the team now has to show it can sustain that performance for the full 90 minutes against New Zealand.

“In the match against Uzbekistan, we had five corner kicks in the first half, but we didn’t get a single one in the second half,” he said.

Stielike said he will test Ji as a top striker, a spot previously occupied by Lee Jeong-hyeop. The 23-year-old Lee, who plays for the military club Sangju Sangmu, was replaced in the 27th minute against Uzbekistan after he cut his forehead vying for the ball.

For Ji, it will be his first time on the pitch under Stielike.

The former Sunderland and Borussia Dortmund forward has yet score with his new club FC Augsburg, but has been getting consistent playing time.

Against New Zealand, Stielike is also likely to start both Ki Sung-yueng of Swansea City and Park Joo-ho of Mainz in the center midfield.