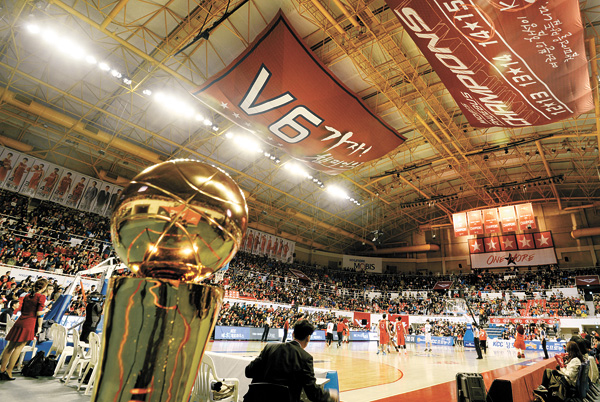 Ulsan Mobis Phoebus and Wonju Dongbu Promy face off in Game 1 of the KBL championship series Sunday at Dongcheon Gymnasium in Ulsan. Two teams will play again at 5 p.m. today.[NEWSIS]

The championship series of the Korea Basketball League (KBL) is under way, and fans are upset about the league’s decision to change the times games start.

With Phoebus aiming for an unprecedented third consecutive KBL championship, Dongcheon Gymnasium in Ulsan was standing room only for Sunday’s game.

A halftime, however, some fans hung three banners on the second floor that criticized the KBL. They read “I can’t take any more of the KBL’s incompetent administration.” “Why is tipoff at 5 p.m. on weekdays when everyone is working?” “Dictator without communication. [KBL Commissioner] Kim Young-ki should resign.”

The banners were pulled down soon after security personnel intervened, and when fans tried to put them up again at the end of the game, scuffles ensued with KBL officials. Fans booed when the officials tried to take away the banners.

But for almost all students or salary workers Ulsan it is nearly impossible to get to a game at 5 p.m.

The KBL apologized for the time change, explaining it was done at the request of broadcasters televising the championship series to avoid conflicts with Korea Baseball Organization (KBO) League games that have higher ratings.

Weekend baseball games start at 2 p.m. and go until at least 4 p.m., the originally scheduled start time for KBL finals games on Saturday and Sunday.

For weekdays, the KBL and broadcasters pushed up the start time from 7 p.m. to 5 p.m. to not overlap with baseball games that start at 6:30 p.m.

“It’s sad that the start time is changing frequently, but those who like basketball will see the games,” he said after the game. “I think 5 p.m. weekday games will be challenging for people who plan to come. They probably will have to use vacation time or watch the second half after arriving at 6 p.m.”

Whatever time it starts, Yang said the five-time KBL champions will be ready for the Game 2.

KBL history shows that in 13 of 18 finals, the team that took the first game went on to win the championship series.