Top of the first, but KBO gets off to strong start

Top of the first, but KBO gets off to strong start 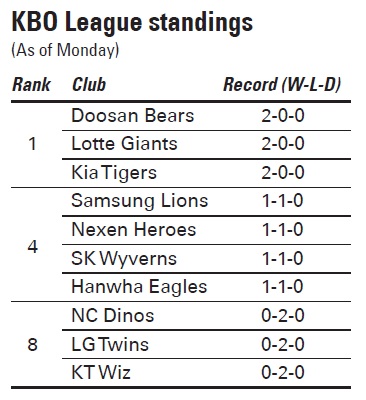 The Korea Baseball Organization (KBO) League hopes to draw at least 8.36 million fans for the 2015 season. If the opening weekend is any indication, the goal just might be met.

Four of the five games were sold out on Saturday for a cumulative attendance of 93,746 and a total of 62,098 fans saw games on Sunday, according to the KBO.

Lefty starter Jang Won-jun of the Doosan Bears, who joined the Seoul club with an 8.4 billion won ($7.7 million) contract, was impressive in his debut, allowing one run in seven innings in Sunday’s 4-1 win against the NC Dinos.

The Lotte Giants had a difficult time with the league’s newest team - the KT Wiz - coming from behind to win both games. On Saturday, the Giants trailed 8-2 and ended up winning 12-9; on Sunday, the Giants got home runs from Hwang Jae-kyun and Jim Adduci in a 5-4 victory.

The Kia Tigers started the season with two wins for the first time since 2003. Kia designated hitter Choi Hee-seop, formerly of Major League Baseball, hit his first home run in 611 days in Sunday’s 7-6 win over the LG Twins.

The Lions, looking for an unprecedented fifth consecutive title, took the first game on Saturday, thanks to solid pitching by Alfredo Figaro. The right-hander from the Dominican Republic allowed two hits and collected five strike outs in six innings of work.

However, the Wyverns bounced back on Sunday, with Andrew Brown hitting the season’s first grand slam in a 7-3 victory.

For Wyverns manager Kim Yong-hee, it was his first KBO win since Oct. 10, 2000, when he was managing the Lions.

Last season’s runner-up Nexen Heroes and the Hanwha Eagles had to go to extra innings Saturday before 2014 MVP Seo Gun-chang delivered a walk-off homer in the 12th inning for a 5-4 Heroes victory.

The 72-year-old coached the former independent baseball club Goyang Wonders after leaving the Wyverns in August 2011.