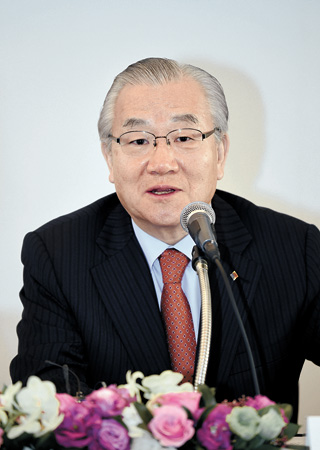 “The more the government has opportunities to open up its domestic market, the better Korea’s economic situations will get,” said Kim In-ho, a Blue House presidential secretary for economy and finance in 1997 under the Kim Young-sam administration, at a press conference Monday in central Seoul.

In particular, Kim urged the Park Geun-hye administration to take a clear stance when joining Trans-Pacific Partnership and other mega-FTAs in the future.

“Countries like Korea with such small domestic markets must join mega-FTAs like the TPP,” he said. “The Korean government so far has been hesitant about it due to complex political and diplomatic relations, but it should make sure to express a clear stance that it wants to join TPP, regardless of what kind of attitude the TPP founding members take among themselves during negotiations.”

Twelve countries, including Japan, Australia and Singapore, have already joined the U.S.-led Trans-Pacific Partnership as founding members and reportedly are scheduled to announce the official launch within two months. However, Korea so far has postponed expressing interest in joining because the group has been perceived as being established to contain growing Chinese influence in the international economy and trade.

Korea’s recent announcement of interest in joining the China-led Asia Infrastructure Investment Bank (AIIB) was a good move, said Kim, especially because it will create more opportunities for local businesses.

“Several U.S.-led international economy groups like Asia Development Bank and the World Bank have done a good job overall, but they haven’t when it comes to helping emerging economies in Asia,” said Kim. “It is definitely a good decision based on our own national interest, regardless of which country leads the group.”

Kim is a strict believer in a market economy and has been a lifetime economic policy expert as a key decision maker in many crucial economic reforms and trade issues, including the Uruguay Round negotiations with the World Trade Organization and devising economic cooperation models with North Korea.