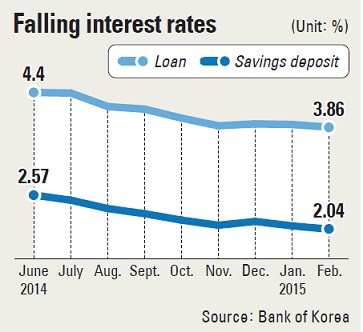 While the central bank unexpectedly lowered its benchmark rate to another all-time low of 1.75 percent earlier this month, interest rates on savings deposits and loans at commercial banks have again dropped to their own record lows.

According to the Bank of Korea on Monday, the interest rate for new savings deposits in February was 2.04 percent. That is five basis points lower than the previous month.

Currently, accounts with interest rates of less than 2 percent represent 30.7 percent of all savings accounts. Those with rates between 2 percent and 3 percent account for 69 percent.

Even interest rates on fresh loans have fallen to record lows, shaving four basis points from the previous month to an average of 3.86 percent.

While interest rates on corporate loans remained unchanged at 4.02 percent, those for households fell 11 basis points to 3.48 percent.

Mortgages saw interest rates drop 10 basis points from the previous month to 3.24 percent, while those taken out in groups were lowered from 3.37 percent to 3.3 percent. Interest rates on loans taken out with no collateral went from 4.99 percent to 4.88 percent.

Widespread lower interest rates come at a time when the Bank of Korea is putting more emphasis on economic recovery by cutting the already record-low benchmark rate by an additional 25 basis points earlier this month.

At a press conference after the BOK’s most recent monthly monetary committee meeting, central bank Gov. Lee Ju-yeol said economic indices in the first two months of the year were much more disappointing than expected.

Interest rates on deposits and loans are expected to experience additional cuts before the second half of the year as the market is already betting the BOK could move to further reduce the key rate.