Confident Kerr wins one for the kid

Confident Kerr wins one for the kid 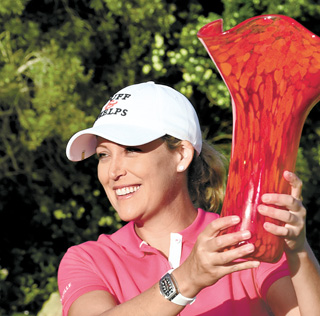 CARLSBAD, Calif. - The putts had not even reached the hole when Cristie Kerr marched right after them because she knew they were going in for birdies. Sunday at the Kia Classic had a familiar feeling for Kerr, even though so much in her life has changed.

Four birdies in a five-hole stretch helped Kerr erase a three-shot deficit in the final round at Aviara Golf Club. Four straight birdies on the back nine enabled her to pull away from Lee Mi-rim and 17-year-old Lydia Ko.

Kerr closed with a 7-under 65 for a two-shot victory, the 17th of her career, this one different from all the others. Before posing with the trophy, Kerr clutched her 15-month-old son, Mason, to celebrate her first win as a mother.

“I could just tell by everybody’s reaction that I had won,’’ Kerr said. “It was just amazing having him there, and he just gave me a big smile and a squeak. He’s screaming now. That’s his thing, and I always hoped this day would come. And now it has. Just so proud.’’

Kerr ended 42 straight LPGA events without a victory dating to the 2013 Kingsmill Championship.

She finished at 20-under 268, breaking by six shots the 72-hole scoring record at a tournament that began in 2010.

Lee nearly made it eight in a row when she drove the par-4 16th green to 4 feet for an eagle to get within one shot. But her next tee shot didn’t work out so well. She pushed it into the trees and chopped up the par-5 17th for a double bogey, costing her any reasonable chance of winning. She closed with a 70.

Ko was tied for the lead with a birdie on the par-3 14th hole, but the No. 1 player in women’s golf didn’t make another birdie the rest of the way. She lipped out on a 5-foot putt on the 16th and finished with a three-putt bogey on the 18th for a 67 to finish third.

It was her 28th consecutive round under par on the LPGA Tour, one short of the record Annika Sorenstam set in 2004. Ko’s next event is the ANA Inspiration at Mission Hills, the first LPGA major of the year.

“Last three holes were a little iffy, like yesterday, but 67 around here is good and I’ve improved my placing compared to last year, so a lot of positives to take from this week,’’ Ko said. “And I’m excited for the first major next week.’’