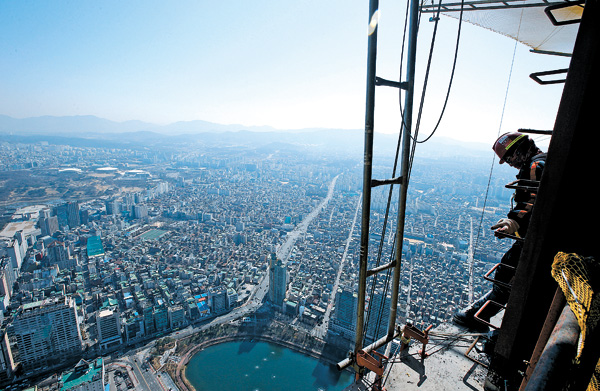 A construction worker looks out from the 100th floor of Lotte World Tower in Jamsil, southeastern Seoul. The retailer celebrated the construction of the skyscraper’s 100th floor, which is the first here in Korea. [NEWSIS]

The view from the 100th floor of the Lotte World Tower can be unsettling, as the skyscrapers that normally tower above are now well below. Apartment complexes look as small as toy houses, and cars look like specs of moving dust.

With the completion of the 100th floor, Lotte Group invited a group of reporters on Thursday to take a peek at the Lotte World Tower, still under-construction, in Jamsil, southern Seoul. The building is currently the tallest building in Korea.

In spite of the crisp spring weather, a gentle afternoon breeze transformed into a stronger gale due to the altitude. The reporters cringed in horror as the combined force of the wind and the vibrations of the power cranes sent a tremor to the top floor.

While the atmosphere of the tour was far from celebratory, the tour was intended to reassure that the high-rise building was safe despite a series of safety lapses at the nearby Lotte World Mall. The mall, which surrounds the tower, houses shops, movie theaters and an aquarium. In 2016, the Lotte World Tower will add a hotel and cafe, in addition to offices and restaurants.

Despite Lotte Group Chairman Shin Dong-bin’s aspirations to create Asia’s Burj Khalifa, controversy over safety has put the Lotte Group on the defensive in the wake of the Sewol disaster.

Safety concerns resurfaced after an acrylic wall in the aquarium cracked and began to leak water in December, followed by the discovery of cracks in the walls of the food court and in the parking lot.

Lotte addressed these concerns in a promotional video clip at the beginning of the tour. The video claimed the structure and the fire protection system is stronger than other competing buildings abroad.

“Lotte World Mall has a deeper foundation than Burj Khalifa,” the video said.

Upon entering the construction site, banners stressing the importance of safety adorned the entrance.

“Action and awareness should create safety, not words” one banner read.

Eight temporary elevators were installed outside the core wall of the construction. The reinforced core stabilizes the building against forces like wind and earthquakes.

To get to the top, the reporters first took the elevators up to the 78th floor and the 98th floor. It took five minutes and twenty seconds to take two lifts to the 98th floor.

From the 98th floor, visitors climbed seven ladders up to the 100th floor, as there was no elevator.

“When completed, Lotte World Tower will have high-speed elevators that can reach the top in a minute,” said Lotte Corporation PR spokesperson Seo Kyu-ha.

A total of 1,500 workers are involved in the construction site. At the top, workers were busy constructing the walls of the 101st floor. They recalled how last winter presented harsh construction conditions.

“Chilly conditions and faster, high-altitude winds make cranes sway a little bit in the winter,” said an anonymous worker. “These conditions make me feel really frightened in the dark.”

However, the winter conditions made the completion of the 100th floor so much more meaningful.

“While it wasn’t easy, I feel a sense of fulfillment whenever I see this building,” said the same worker. “The building will be a landmark visible from anywhere in Seoul.”

“I am proud of being part of such a big project,” added the worker.

From this site, visitors can see the city of Incheon and its beaches. Seoul landmarks such as the N. Seoul Tower and the Hanwha 63 City building will look much smaller from here.

While the view is awe-inspiring, the fate of the Lotte World Tower hangs in balance, especially after the 2014 Sewol disaster which resulted in more than 300 people dead.

As the disaster has made Korea more sensitive to safety standards, some are concerned the high-rise building can weaken the ground and increase the risk of aviation accidents.

In accordance with safety concerns, the Seoul Metropolitan Government approved the early opening of the whole Lotte World Mall on the condition that Lotte works to meet the city government’s safety requirements.

However, a series of accidents at the construction site, in addition to a lack of safety precautions and traffic measures, have caused several delays to the planned 2013 opening of the lower buildings in the complex.

Additionally, several safety lapses at the Lotte Mall, such as a crack and subsequent leak at the aquarium, have prompted the group to form a safety inspection committee.

The incidents have turned people away from the complex when the Lotte World Mall first opened in October.

The decrease in the number of mall workers coincides with the temporary three-month closure of the aquarium and movie theaters due to safety concerns.

The downturn of the Lotte World Mall benefited nearby multi-purpose shopping complex COEX in Samseong-dong, southern Seoul, where the number of visitors surged after the end of a year and a half-year remodeling period in November.

Many people predicted that the opening of the Lotte World Mall would affect sales at COEX.

In spite of unfavorable conditions, the Lotte Group vows to restore its image.

“After the launch of the safety committee, the incidence of accidents has dramatically decreased,” said Lotte Corporation PR spokesperson Seo Kyu-ha. “We will continue making efforts towards safe construction.”