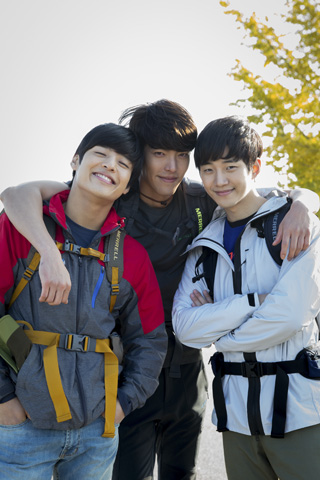 “Twenty,” directed by Lee Byoung-heon, opened in the No. 1 place on the box office. From left: Actors Kang Ha-neul, Kim Woo-bin and Lee Jun-ho play a hilarious trio of friends who go through ups and downs after hitting 20. Provided by the distributor

The much-anticipated comedy flick “Twenty,” a highly entertaining portrayal of being young in Korea, thundered into the domestic box office during its opening weekend, snatching first place on the chart.

Since it was released on Wednesday, the coming-of-age story has collected 1.1 million admissions, making 8 billion won ($7.2 million) in Korea.

“Twenty,” the debut commercial feature director Lee Byoung-heon, captures the ups and downs of young people in their 20s, touching on the very hilarious and the very pathetic.

Up-and-coming actors Kim Woo-bin, Kang Ha-neul and Lee Jun-ho from boy band 2AM play a trio of friends who are stumbling through life after turning 20, entering university, dating girls and discovering their future dreams.

Director Lee, who gained fame for penning hit movies such as “Love Forecast” (2014), “Sunny” (2011) and “Scandal Makers” (2008), details their lives in a realistic manner while also succeeding to provide the audience with several laughs.

The film, which brims with powerful drumbeats on top of a rhythmical jazz score, portrays the conflict between aspiring drummer Andrew, played by Miles Teller, and his abusive teacher Fletcher, played by J. K. Simmons.

The dystopian thriller may have a firm fanbase in the United States, but in Korea it has constantly failed to earn attention. The first in the series, “Divergent,” attracted an audience of just 423,794 (accruing 3.3 billion won) in total last year.

“The Good Lie” starring Reese Witherspoon opened in local theaters with 7,544 cinemagoers, landing in 10th place. Directed by Philippe Falardeau, the story was inspired by the so-called “lost boys,” the Sudanese children who crossed the border to Kenya between 1983 and 2005 to escape from the deadly violence during the civil war in their home country.