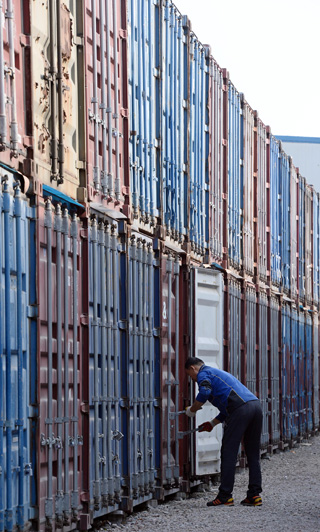 Investigators found hidden evidence in a graft probe stashed in a storage container in northeastern Seoul.[NEWSIS]

Prosecutors investigating Ilgwang Group Chairman Lee Kyu-tae over corruption allegations in the defense industry found a literal ton of concealed evidence last week in a storage container in a yard about 10 kilometers (6.2 miles) from the company’s headquarters.

The joint investigation team tasked with uncovering corruption in the defense industry sent its investigators Thursday to an outdoor storage container yard near Mount Dobong, northeastern Seoul, where they found documents and flash drives containing information about company projects that had been stashed away in the container over the past decade.

The container is believed to have been used to store the company’s data to avoid investigation.

“We assume taking a look at the documents will take a while,” a prosecutor on the investigation team said.

Lee stands accused of embezzling about $460 million by exaggerating costs in 2009, when the group’s arms dealing affiliate, Ilgwang Gongyoung, served as a domestic broker when the Defense Acquisition Program Administration acquired an electronic warfare training system (EWTS) from Havelsan, a Turkish munitions company.

He is currently being detained for investigation and has reportedly not been cooperating in the investigation, nor has he provided a statement. Lee has also maintained that the EWTS transactions were legitimate.

The program aimed to train pilots in electronic countermeasures against North Korean interceptors, surface-to-air missiles and antiaircraft artilleries, though it was questionable whether the EWTS met necessary requirements to be used in operations.

The discovery of the container was a boon for investigators, who failed to find any crucial evidence on March 11, after raiding the company, Lee’s residence and a nearby church where the chairman serves as an elder.

In another raid on Lee’s office at the church, investigators found a secret annex behind a bookshelf where he kept his safe and nine CCTV monitors that surveilled the premises. According to prosecutors, Ilgwang Gongyoung employees attempted to block the entrance to the hidden room in the raid. Investigators learned the company was storing its documents in the outdoor storage unit after interrogating two employees who worked as safe keepers.

Prosecutors plan to indict Lee for embezzling and destroying evidence.