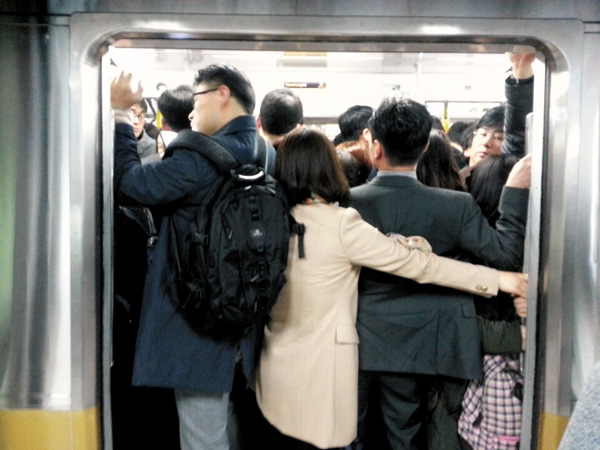 Passengers board a train at the platform in Yeomchang Station on Monday during morning rush hour. Monday was the first work day the extended route on the already crowded subway line No. 9 was in operation. [NEWSIS]

Commuting hours appeared just as poor as expected on Monday, the first weekday after the newly extended section of subway line No. 9 first began operations over the weekend. 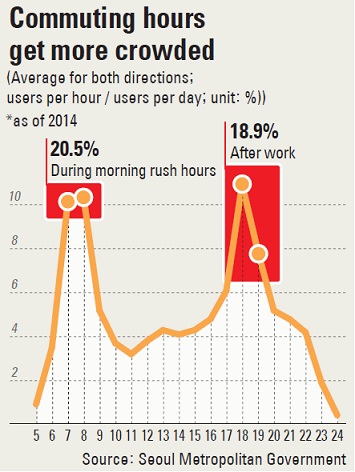 Subway line No. 9, which traverses Seoul horizontally beneath the Han River, is notorious for its high traffic during rush hours, and the situation appeared even worse Monday with its trains traveling farther east.

Yeomchang Station has traditionally served as a barometer for how crowded trains will be during commuting times, with trains during morning rush hour on the weekdays typically at 2.4 times capacity.

On Monday, a number of passengers came to Yeomchang Station around 6 a.m. or just after - earlier than normal.

“I came out about 40 minutes earlier than usual because I thought it would be too difficult to ride the subway after 7,” said passenger Kim Hyo-eun, 29.

The Seoul Metropolitan Government, which has struggled to come up with countermeasures, deployed free buses heading toward Yeouido Station, one of the most common destinations among morning travelers, to distribute passengers, though most appeared unwilling to take advantage.

While most people in the subway station were attempting to grab the train by 7 a.m., only two or three people waited for the bus on the ground level.

“I never heard how and where I could take the bus or how long it would take,” said Kim Myeong-su, 39, who works in Yeouido. “I also found out that the bus was free when I got on.”

However, lack of promotion wasn’t the only problem. When the rush hour began at around 7:30, congestion set in.

“It took a long time for the bus to pass through Seoul Bridge, which is a chronically congested area,” said passenger Jang In-ho, 48. “I think I should come out earlier tomorrow.”

The city government said 885 people used 49 free buses on Monday, much lower than anticipated, while only five people took the free buses that traveled the farthest, from the Gimpo International Airport to Yeouido.

“Buses that depart from Gayang Station to Yeouido take at least 30 minutes, while the subway only takes 11 minutes on rapid trains and 20 minutes on all-stop trains,” said Kim Gyeong-ho, who heads the City Transportation Headquarters in the city government. “It seems obvious that people still prefer the subway.”

The problem isn’t expected to get better until September next year, when the operator, Seoul Metro Line 9 Corporation, will buy 20 more trains.

The daily chaos stems largely from the fact that the city government did not accurately estimate the number of commuters from the beginning. The Korea Transport Institute estimated in 2005 that about 240,588 people took subway line No. 9 daily. However, the figure was already 37.4 percent higher last year at 384,423.

A local government official explained that the institute’s survey at that time remained “as conservative as possible” to avoid criticism, particularly because some light rails and bridges in certain areas across the country were considered a waste of tax money.