Boy gets a souvenir Benz

Boy gets a souvenir Benz 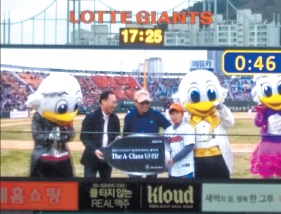 A 13-year-old boy won a Mercedes-Benz car in a random drawing during the Lotte Giants’ season opener on Saturday. [Ilgan Sports]

The Lotte Giants are under some pressure from their fans after a terrible 2014 inside and outside the stadium. As the team stumbled to a seventh-place finish, the front office was accused of using closed-circuit TV to illegally monitor players.

To regain fan support, the Busan club pulled out all the stops for the opener, bringing in female idol groups and selecting the mother of the late Choi Dong-won, the club’s legendary pitcher, to throw out the ceremonial first pitch. As a result, Sajik Baseball Stadium was sold out on Saturday.

But the highlight was a random drawing that awarded a Mercedes-Benz A Class car to a 13-year-old boy. The boy may have looked puzzled receiving the prize, but there was a big smile on his dad’s face.