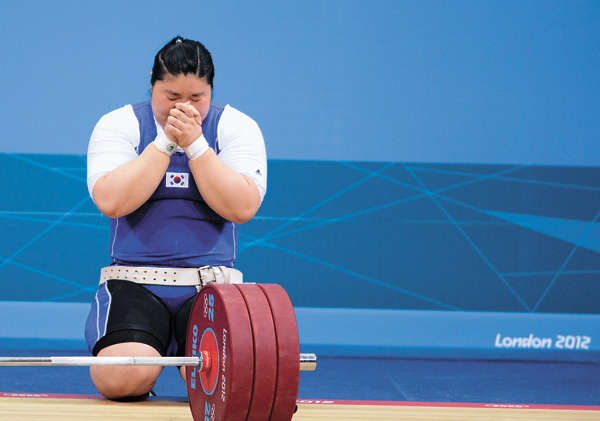 Jang Mi-ran prays after failing on her third attempt in the clean and jerk at the London Olympics on Aug. 5, 2012. It was her final appearance in the Summer Games. [JoongAng Ilbo]

On Aug. 5, 2012, at the London Olympics, Koreans shared tears with weightlifter Jang Mi-ran, not because she barely missed winning a medal, but because her effort and performance would be missed.

Jang finished fourth in the women’s over-75 kilograms class after clearing 289 kilograms in total, far below her personal best of 326 kilograms.

After she failed in her third attempt at 170 kilograms in the clean and jerk, Jang knelt and prayed before kissing the barbell to bid adieu to weightlifting, a heart-moving scene that Koreans remember still. 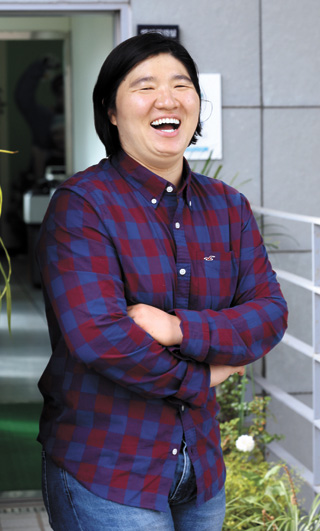 Sports pundits say Jang was not only a great weightlifter, but an inspirational athlete who has consistently instilled hope in young athletes through her humility and continuous effort.

Jang was an average student who liked to play piano and draw, although she recalled her mother gave her a hard time about her eating. Her father, who also was a weightlifter, proposed that she start weightlifting when she was 16, as Jang couldn’t go to her desired high school due to low test scores.

“I didn’t start weightlifting because of my own interest, but on the recommendation from my parents and coaches, so I didn’t like weightlifting at first,” she said at her retirement press conference in 2013. “However, I think all of us have one thing we can do well and I didn’t know this would be it.”

After joining Wonju Technical High School and getting proper lessons and training, Jang began to fall in love with the sport. According to an interview with the IWF in 2006, Jang, who already was competing in the over-75 kilogram category then, said at her first competition she did 45 kilograms in the snatch and 65 kilograms in the clean and jerk.

“I was lucky because I had a very good coach: Kim Hae-kwang at the Wonju City Club,” she said. “He discovered my talent and conducted my training. I started to enjoy the workouts more and more.”

With her skill and power, Jang quickly emerged as a top prospect. In June 1999, just eight months after she learned weightlifting, she collected two bronze medals in the national championships. The following year, Jang started to set Korean records tournament after tournament, while her totals were gradually increasing. In 2000, she lifted 247.5 kilograms and the following year 260 kilograms.

After wining three bronze medals at the Junior Worlds in 2011, Jang joined the senior stage and her consistent rivalry with Chinese weightlifters continued.

At the 2002 Asian Games in Busan, Jang lost to China’s Tang Gonghong to settle for silver at 272.5 kilograms in total, At the 2004 Athens Olympics, Jang finished second to Tang again despite a controversial call by a referee.

“I have seen and learned much,” Jang said in an IWF interview after the 2004 Summer Games. “The final conclusion is that one must work more and keep on improving one’s results, so that the victory should be unquestionable.”

But after two silvers, Jang began to collect gold medals, winning three consecutive World Weightlifting Championships from 2005-7. At the 2006 Worlds in the Dominican Republic, she won the event despite suffering inflammation in her middle ear.

From the middle of 2000s, her rival was China’s Mu Shuangshuang, who lost to Jang in all three Worlds. However, she beat Jang at the 2006 Asian Games in Doha.

In 2007, Jang switched her weightlifting club from Wonju City to Goyang City with a three-year deal worth 470 million won ($423,449), becoming the highest-paid Korean weightlifter in history.

For the 2008 Beijing Olympics, Jang was favored to win as Mu Shuangshuang had not been selected for the Chinese national team. She easily won the gold medal, setting world records. The total cleared weight difference between Jang and runner-up Olha Korobka of Ukraine was 49 kilograms.

After winning another World Championship in 2009, which was held in Korea, Jang went on to win the 2010 Asian Games in Guangzhou and 2012 Asian Championships. However, Jang was hampered by age and a car accident in 2010 in which she hurt her lower back.

After her last inspiring effort at the 2012 Summer Games, Jang lifted a barbell for the last time at the National Sports Festival in October 2012 , winning the snatch, clean and jerk, combined. It was Jang’s 10th consecutive triple crown in the domestic event.

As younger lifters such as Zhou Lulu of China and Tatiana Kashirina of Russia, who currently holds the world record, rose to the scene, Jang announced her retirement in January 2013. At her retirement ceremony, Jang said her next goal was to be an elected a member of the International Olympic Committee.

Jang has the Blue Dragon of the Order of Sport Merit, Korea’s highest award for athletes, and a public gym in Goyang, Gyeonggi, named after her.

Jang is now busy with her her second career as president of the Jang Miran Foundation, whose mission is to help young athletes in minor sports.

Jang also has been lifting some books, last month earning a doctorate in physical education from Yongin University.

Although she is busy, Jang recently told the JoongAng Ilbo that she still lifts barbells at least three times a week.

“Exercise gives you healthy ideas,” she said. “I want to keep delivering positive energy to help children have dreams.”