Rush & Cash closes in on title with Game 2 win

Rush & Cash closes in on title with Game 2 win 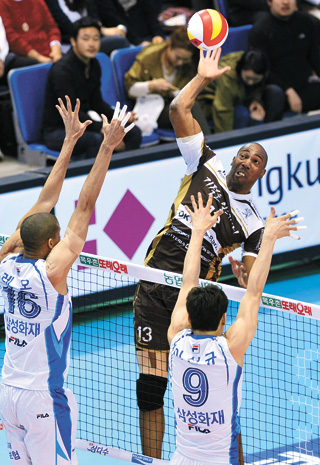 When OK Savings Bank Rush & Cash beat Samsung Fire Bluefangs in the Game 1 of the Korea professional volleyball league (V-League) championship series, many would have thought this was a fluke.

However, Rush & Cash wasn’t joking in its Monday night away victory, leaving the team one win from capturing the championship in its first trip to the V-League Finals.

As V-League history has shown, the winner of the first two games has never failed to win a championship series.

“I’m not going to count the chickens before they’ve hatched,” said Rush & Cash coach Kim Se-jin after Game 2. “We just have to focus and play, rather than think of taking the championship.”

Rush & Cash’s Game 1 strategy included making hard serves and shaking the opponents’ attacking process from the start. Without a good serve response, Bluefangs Setter Yu Kwang-woo could not make a good pass to Left Attacker Leonardo Leyva Martinez. Although the 25 year-old Cuban (also known as Leo) had a 56.9 percent attacking success rate in the regular season, his attacking success rate fell to only 47 percent in Game 1.

Game 2 was similar as Coach Kim had his players just practice serves before resting his players in on morning of the game. In contrast to Rush & Cash, regular season leader Bluefangs had a morning practice in hope of tying the series.

Bluefangs Coach Shin Chi-yong previous previously said that the championship series would not be easy, but did not expect it to be this difficult.

“In a long race like the regular season, it’s about how you employ good management and strategy, but in the short-term race, it’s about competitiveness and fighting spirit,” said Shin before Game 2. “However, there isn’t really an acute way [to reverse the situation].”

But it turned out the Bluefangs were worse off than they were in Game 1, as the team marked only 41.97 percent accuracy in receptions, while Rush & Cash held a solid 78.57 percent. As the serve receptions got unstable, Leo’s attacking success rate also stayed on at 43.8 percent.

“Because of pressure, players couldn’t make their plays, and I’m responsible for it,” said Shin. “As Leo is not in a good condition, it makes other players unstable.”

Experts said that serves and receptions were not the only determining factors for the two teams, but the performance from the attackers was a factor too. For the Bluefangs, Park Chul-woo, who doing his military service, was also a critical factor.

“In the championship series, there needs to be a local ace attacker,” said Shin. “I never thought Park Chul-woo would be needed, but I feel the void left by him.”

Shin said that he hopes to create a “miracle” by tying the series in Ansan and taking the series back to Daejeon for a decisive Game 5.

However, Rush & Cash Coach Kim, who had played under Shin in the Bluefangs’ heyday, said he will close out the series at home.

“We will not go back to Daejeon,” said Kim. “If we go there again, it will mean we can’t win the championship.”