Korea, France to celebrate 130 years of ties with art, culture

Korea, France to celebrate 130 years of ties with art, culture 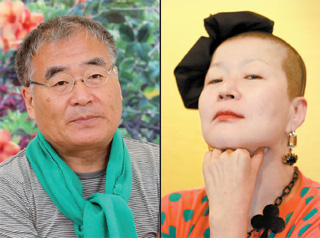 Korea and France hope to feature various facets of their culture during the upcoming “Years 2015-2016 of Korea-France Bilateral Exchanges” event. Pieces by artists Ahn Eun-me and Bae Bien-U are among the cultural programs the preparatory committee has confirmed so far. [JoongAng Ilbo]

With about six months left before an event to celebrate 130 years of diplomatic relations between Korea and France launches, the organization committee has announced that it has selected a total of 117 projects so far.

Under the event, a host of Korean cultural programs will be held in France, and vice versa, allowing the people of the two nations to experience the culture of the other without having to travel.

There are also a number of jointly organized activities. 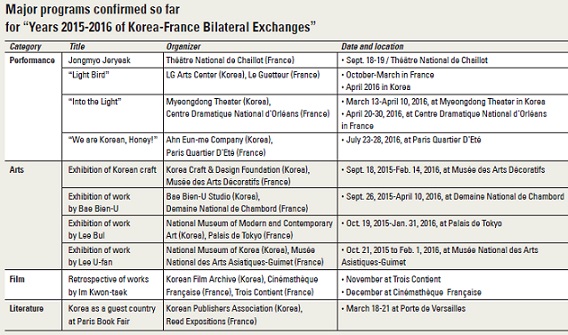 “We believe the process leading to the program is equally important, as well as how it can be utilized after it’s over,” Choe Jun-ho, vice president of Korea National University of Arts’ planning and external affairs, told reporters at a briefing on Tuesday while explaining how the 117 cultural programs were chosen.

On the other hand “Jongmyo Jeryeak,” or royal ancestral ritual music from Korea, will be staged in Chaillot National Theater in Paris in September.

Afterwards it will travel to other parts of France.

The 117 projects include “Into the Light,” a performance jointly created by Korea’s Myeongdong Theater and France’s Centre Dramatique National d’Orleans; “We Are Korean, Honey!” a show by the Ahn Eun-me Company of Korea and Paris Quartier d’Ete of France; an exhibition of Korean craft co-produced by Korea Craft & Design Foundation and Musee des Arts Decoratifs, among others.

There will also be exhibitions of world-renowned Korean-born artists such as Lee Bul, Bae Bien-U and Lee U-fan in France, as well as a retrospective of film director Im Kwon-taek.

Daniel Ollivier, director of the French Cultural Center, said that although the current programs are mostly in the categories of performances and the arts, he would like to see more in the areas of science and education in the future.

The preparatory committee began receiving applications on March 16 for another batch of cultural programs that will be held during the event.

Applications will not be accepted after April 15 and the organizers will announce their selections in May.