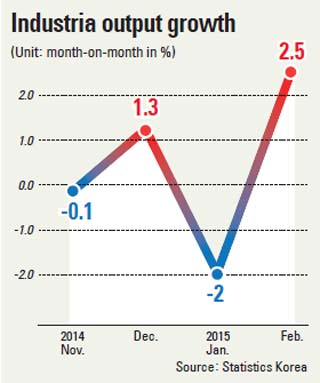 A report released Tuesday by the government showed a rebound in industrial production and consumption in February, mainly due to sales increases during the Lunar New Year holiday and low records in January.

However, poor performance in January (-2 percent) largely affected the jump in output.

Despite the drop in leisure (2.9 percent) and publishing, broadcasting and information dissemination (0.4 percent), the increase in retail and wholesale (3.7 percent) and finance and insurance (2.9 percent) pulled overall growth in the service sector.

Orders for machinery dropped in the non-manufacturing sector by 13.3 percent year on year, while orders rose in manufacturing, which includes the automobile and electronics industries, leading to a 1.4 percent overall rise.

The construction industry saw a 4 percent decrease in orders from last year, while orders for civil engineering shrank by 12.7 percent, which included a drop in bridge construction orders (92.6 percent).

For builders, state-run construction companies saw a 49.7 percent decrease in orders, while private builders recorded a 29.3 percent increase in orders.

“Between January and February, the average industrial output growth rate grew only 0.1 percent compared to growth in the fourth quarter of 2014,” Park Byeong-seon, an official from Statistics Korea, said at Tuesday’s press briefing at the Sejong city government complex. “Although February showed signs of improvement, we can’t say the signs are strong due to calendar effects.”