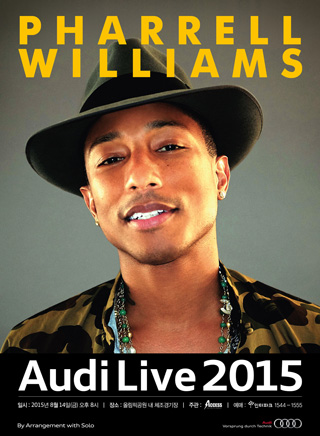 August 14: Renowned music producer and singer Pharrell Williams is coming to Korea for the first time. Last year, the single “Happy” topped the Billboard charts for 10 weeks and swept the 51st Grammy Awards last year with three prizes. His popularity in Korea was proven when “Happy” became the most played song on domestic music streaming websites.

April 15 to 23: Pop star Lee Moon-sae, who was popular in the ’80s and ’90s for his emotional lyrics and harmonious melodies, will celebrate the success of his national concert last year. The singer’s previous shows were staged outdoors, though this year’s performance will be held inside.

April 15: Irish trio The Script will return to Korea two years after they pledged to do so at their first concert in Seoul. The band’s members are renowned worldwide for their soulful voices and sentimental lyrics. They are set to perform their hit songs “The Man Who Can’t be Moved” and “Breakeven,” along with recently released songs from their fourth regular album, “No Sound Without Silence.”

April 20: YouTube sensations with more than 3.6 million subscribers, The Piano Guys, are set to come to Korea for the first time as a group. All four of the band’s albums, which were released through Sony Music, have reached No. 1 on the Billboard New Age and Classical Albums charts.

April 25: With ’90s music back in vogue, “Super Concert” has drawn considerable attention for its star-studded lineup. So far, a cast of 21 singers has been unveiled for the show, including Lee Jung-hyun, Kim Hyun-jung and So Chan-whee, who grabbed attention after the success of the hit MBC program “Saturday, Saturday, Singers.”

April 27 to May 9: The annual chamber music festival, now in its 10th year, will again feature some of the country’s best classic musicians.

“Salon Concert” will feature at the House of Yun Bo-seon, the country’s fourth president.

May 1 and 2: One of the most intriguing ballad singers in the nation, Gummy, is set to present her first concert of the year. Her recently released album - the artist’s first after a four-year hiatus - garnered considerable attention and helped to consolidate her position as Korea’s leading R&B singer. Gummy is scheduled to perform her hits “When You Return” and “Like Them,” among others.

May 2: The sudden cancelation last year of Paul McCartney’s high-profile concert broke the hearts of Beatles fans nationwide. However, the 73-year-old is keeping his promise is set to return for his “Out There! Tour” this May. McCartney will perform the legendary songs “Yesterday,” “Let It Be” and “Hey Jude,” as well as tracks from his latest studio album.

April 10 to July 26: The up-and-coming Broadway musical “Cougar” will be staged in Korea for the first time. The slang term “cougar” refers to a woman with economic power who indulges in relationships with younger men. The three fabulous women find love for themselves while letting their inner cougars roar and purr.

April 10 to May 10: “Cats”, one of the best-loved musicals in the world, gained attention when it was staged in Korea for the first time in six years last year. With the passionate support of the Korean audience, the musical is holding encore performances for a month.

April 28 to July 26: “Musical Phantom” tells the heartbreaking story of the smash-hit Broadway musical “The Phantom of The Opera” from another perspective. Its stunning cast includes singers Kai and Park Hyo-shin. 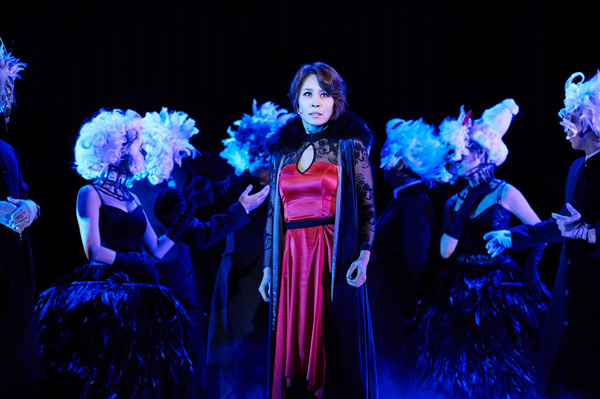 Korean mystery musical “Agatha,” which recreates the disappearance of British detective novelist Agatha Christie, is being staged at the Hongdae Daehangno Art Center. Provided by the organizer 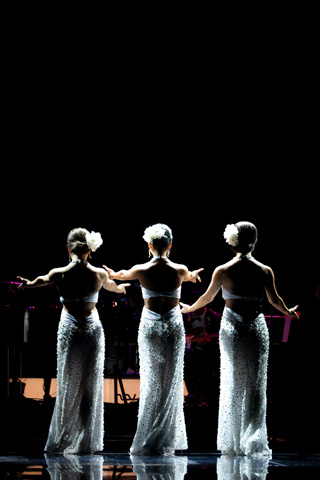 To May 25: “Dreamgirls,” whose 2006 movie version was hugely successful in Korea, will be staged as a musical here once again, six years after its local debut.

The performance in Seoul was produced by a Korean production team, rather than through collaboration with the original team. The sound track was also arranged for a Korean audience.

June 13 to 17: A groundbreaking version of “Giselle,” one of the world’s signature ballets, will be performed in Seoul. The romantic story from leading choreographer Graeme Murphy follows the original plot line.

May 23 to 25: The annual jazz festival, now in its ninth year, will again feature some of the top musicians from Korea and worldwide. In the Korean lineup, familiar names on the bill include Epik High, Roy Kim, 10cm, Jang Ki-ha and the Faces and J Rabbit. Overseas performers slated to play include MIKA, Basement Jaxx, Tamia and Jeff Bernat.

May 23 and 24: Green Plugged Seoul has already revealed the names of 32 artists who will perform at this year’s sixth anniversary festival, and there are still plenty more to be unveiled in its second announcement. YB, better known as the Yoon Do-hyun Band, renowned indie rock band Guckkasten, Hot Potato, Kim Sa-rang and Buzz will perform at the event. More acts will be announced on March 21.