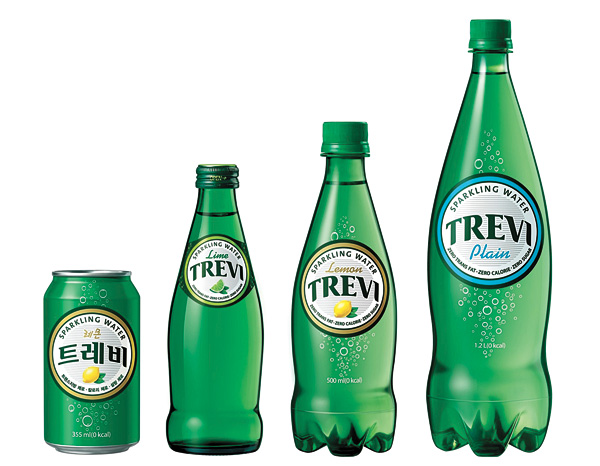 Trevi, a sparking water from Lotte Chilsung Beverage. Provided by the company

Carbonated water has long been a kitchen table staple in many European countries, and is recently becoming a new popular drink in Korea.

Carbonated water (also known as “fizzy water” or “sparkling water”) is gaining traction as more consumers have become wary of sugary drinks due to health concerns.

The sparkling water makers claim their products contain no trans fats, calories or sugar, while purging internal pollutants from the body, and helping with weight loss and metabolism. 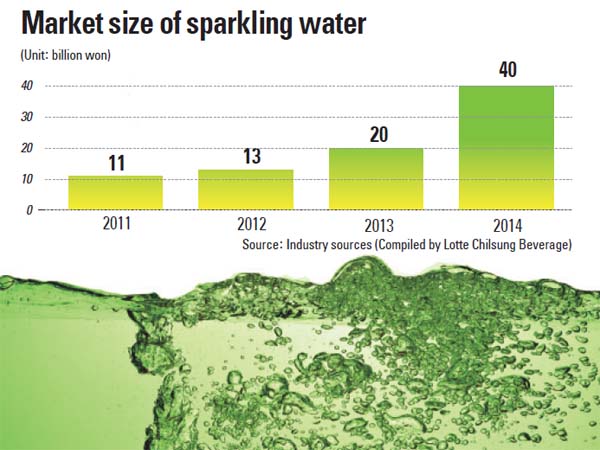 The market size of sparkling water has increased by 100 percent last year to 40.5 billion won ($36.5 million) according to industry data quoted by Lotte Chilsung Beverage.

In response to growing interest, major beverage companies such as Lotte Chilsung and Hite-Jinro have made efforts to produce the beverage as the companies have sold the products, albeit differently.

Lotte Chilsung Beverage entered the sparkling water market with Trevi, coming in three flavors of lemon, lime and plain. The company also sells the drink in plastic or glass bottles, and cans.

“We are particularly focused on promoting Trevi to young women because they are health conscious and they pursue trendy things,” he said. “This is why we held promotional events at music festivals, water parks and fitness centers.”

According to market research from Nielson Korea, Trevi emerged as the top sparkling water brand last year in terms of market share due to its business strategy.

The rise of Trevi coincides with the downturn of French sparkling water Perrier, the previously undisputed market leader before the early 2010’s.

Perrier has now fallen to third place with a 23.3 percent market share, with Chojung Sparkling Water (28.5 percent) and Trevi (29.6 percent) leading according to Nielson Korea.

Local company Ilhwa claims its first sparkling water Chojung, in flavored and unflavored varieties, comes from a natural spring in Chojung-ri in Cheongju, North Chungcheong. The spring is considered a major natural water source with a history of more than 600 years.

“While the overall food and beverage market is stuck at a slow growth rate, the performance of carbonated water is notable,’’ said Nielsen Korea researcher Cho Dong-hee.

“We believe that carbonated water will grow further as a growing number of people are looking for healthier alternatives for soda,” he said.

The growth has attracted new local players to the sector dominated by top three makers Lotte Chilsung Beverage, Ilhwa and Perrier, as the newcomers look to detract from dominant market shareholders.

“Sparkling water will lead the beverage market for the coming years,” said Namyang Dairy Products CEO Lee Won-goo. “Frau will be an attractive option for consumers looking for fizzy yet fresh tastes.”

Hite-Jinro also entered the sparkling water industry with Diamant in 2009.

“Diamant is made with a special cooling effect to give a more tingly and fresh taste,” said a Hite-Jinro representative.