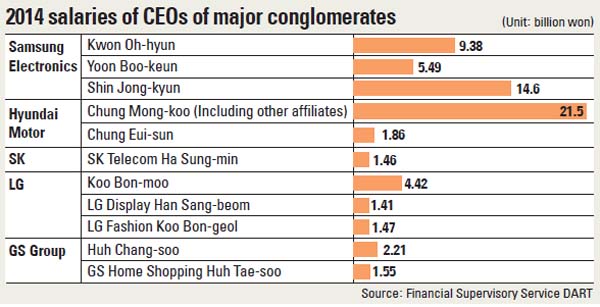 The statistics were made available Tuesday by the Financial Supervisory Service through its Data, Analysis, Retrieval and Transfer (DART) electronic disclosure system.

Under a revised capital market law, listed companies are required to disclose salaries of executives with management rights to the financial authority within 90 days of the start of their new business year.

Among the owners of family-run businesses, the highest paid was Chung Mong-koo of the nation’s top automaker, Hyundai Motor Group.

SK Group Chairman Chey Tae-won, who was the No. 1 chaebol executive in terms of annual salary in 2013 at 30.1 billion won, was excluded in the latest report. Chey has been jailed and resigned from all of his posts at SK subsidiaries.

Eyes were on the salaries of three CEOs of Samsung Electronics, who ranked with the nation’s highest-paid executives in 2013. Salaries of Chairman Lee Kun-hee and Vice Chairman Jay Y. Lee are not disclosed.

Kwon Oh-hyun, the vice chairman of the top electronics maker and head of the Device Solution Division, took home 9.38 billion won, up from 6.7 billion won a year earlier.

Despite tumbling retail sales last year in the wake of the Sewol ferry sinking tragedy in April, salaries of large retailers climbed.

In the Internet world, Lee Sirgoo, co-CEO of Daum Kakao, was the highest paid at 4.2 billion won. The sale of 4 billion won in Kakao stock was included in his annual salary.